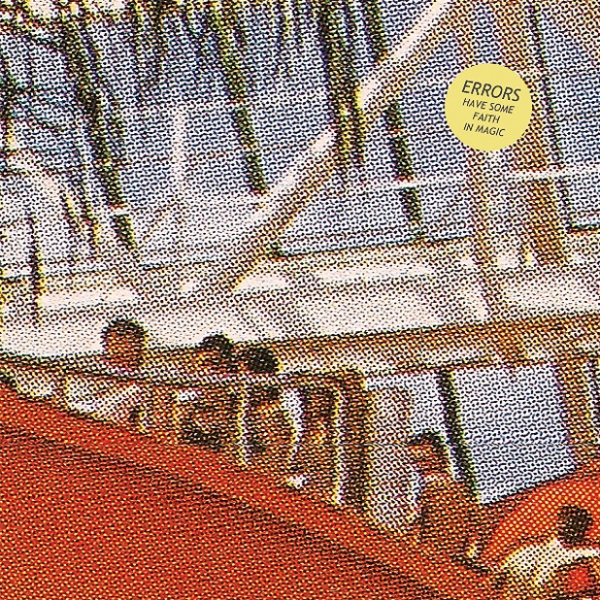 When discussing which records The Line of Best Fit’s writers were most looking forward to hearing in 2012, there were a few names that kept cropping up. The more we considered this question, the more we realised that over the past year or so, this particular band had come to possess all of the tools required to create something really quite special. As such, the third album from Errors was placed very high up our list of “things to look forward to this year”, and it’s safe to say that we’ve not been disappointed.

With Have Some Faith In Magic, Errors have constructed something which, at first listen, appears to be fairly simple and graspable (which is probably the side of things that The Saturdays latched on to), but after peeling back the surface, the record reveals itself to be made up of all of the ingenuity and inspiration that we’ve come to expect from this band. The Glaswegian four-piece have become so good at their craft in the eight years since their formation that they make this whole album-creating process sound effortless – the trick being to make music that can be as emotionally involving, as physically involving and as mentally involving as the listener chooses for it to be.

Opening up with ‘Tusk’, we can instantly hear that this is the most considered Errors record to date. There’s an immediate sense of space and ambition to the track, and the seamless mix demonstrates a confidence that seems to be flying high in the Errors camp, as though the group are feeling fully comfortable with their sound and ready to take on and conquer whatever they please. ‘Tusk’ is a perfect choice of opener. A shimmering backdrop is overlapped by a driving guitar melody before the whole track slips into a warm, resonating synth-led offering. Singles ‘Magna Encarta’ and ‘Pleasure Palaces’ particularly stand out, each possessing the strong, driving melodies typical of this group, whilst providing some of the more rousing and hypnotic moments to be found on the album. ‘Blank Media’ offers a response to these more raucous tunes, offering up a slower tempo and a softer mix, balancing out some of the more bracing elements on the record.

Over the past year, Errors have spent a lot of time on the road including a jaunt Stateside in support of their label bosses Mogwai. Having played in front of some unfathomably large audiences has clearly done nothing but good for this band, who have incorporated previously unexplored live elements, including processed vocals, into their repertoire. A particular high point which shows off these freshly-tapped resources comes towards the close of the album in the form of ‘Cloud Chamber’. This is one of the tracks where the increased use of vocal elements is really given the time and space to shine, and the result? A rich and absorbing track that adds a soulful, soft and alluring edge to the record.

Errors have always been an immediately attractive proposition. From the get-go, their records have been loaded with catchy hooks, sonic nuances and understated textures,and Have Some Faith In Magic is exemplary of this skill. But there’s something much more grand and pristine about this album than what we’ve heard from Errors before. That’s not to say that it’s polished or glossy in any way, more that it’s very well thought out. Each track slips seamlessly and seemingly effortlessly into its successor, yet each track also stands sturdily on its own.

Have Some Faith In Magic proves that there’s a lot more to this band than excellently titled records (see: How Clean Is Your Acid House? and It’s Not Something But It Is Like Whatever) and that almost jarringly catchy, trippy number that is ‘Supertribe’. This is a subtly brilliant album which harbours a quiet confidence, some outstanding tracks and a slight smirk knowing that ambitions were achieved with this effort, and that expectant listeners’ ears will well and truly have been appeased.