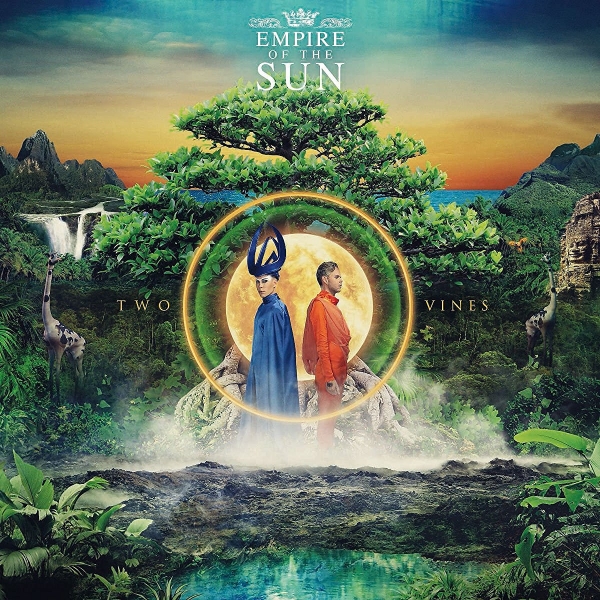 Luke Steele and Nick Littlemore’s 2009 debut Walking On A Dream commenced with four brilliant tracks, of which “We Are The People” remains arguably one of the finest pop songs of recent years. These tunes, alongside the camp 80s film imagery of the record sleeves and the preposterous live shows, were let down by a lack of truly great numbers beyond that great quartet.

This trend continued on the  follow up, 2013's Ice On The Dune. Despite containing the sumptuous, introspective highlights  "I'll Be Around" and "Awakening", the stylistic change from lofi synth pop to big room EDM designed more for the flamboyant live performances than home listening proved to be a change which played to neither of their strengths.

So third time around, and now a big deal in the 'States due to the title track of their debut album becoming a Top 20 hit thanks to a car advert (the track cynically bolted onto the end of this release for increased 'unit' potential) eight years after its release, does Two Vines manage to avoid the mistakes made on their previous two albums?

Not quite, although it is an improvement on IOTD. There is brilliant pop here, but it's only evident when they hold back on the histrionics. The nu-AOR of opening track "Before" is Fleetwood Mac's "Dreams" re-imagined as optimistic pop-bang, and the chorus of "Come wash the clouds away / Can't wait for summer" is a played out sentiment, but still a sweet one.  The seductive 80s beats on the autotune-heavy "There's No Need" takes the album down a slower route (think Chromatics covering Peter Cetera), "First Crush" is a lovely thing despite it just being a retread of "Half Mast", while "Way To Go" continues on the same path, both revisiting the muted home-made style of their debut. These are the best tracks here, and they more than hold their own when put alongside the debut's four key songs.

The yearning title track and the dry ice epic "Digital Life", are both designed for maximum anthem potential. The ingredients are here: the tentative intro, the HUGE chorus, the stadium sized synths, but they, and the majority of the rest of the album, suffer from an overly compressed sound. It's blatantly clear from listening that the intent here is to sound as big as possible, but the rambunctious production spoils it. Still, it probably sounds great on a pair of Beats.

The same errors they made on their previous albums also befall them here. "Friends" is not the quasi-cosmic re-appropriation of pop they strive for (it sounds like Jason Donovan), whereas "Ride" is an earworm chorus in desperate need of a decent song with added Daft Punk robot effects. "ZZZ" is a real nadir, the hip hoppy intro switches depressingly into anemic cod reggae. It's surprising that the people in their camp didn't pull one of them aside and say, 'listen..are you sure about this"? It's a cringy piece of calypso uplift so bad it makes Peter Andre's "Mysterious Girl" sound like a long lost King Tubby 10 inch dub plate - here, they teeter one key change away from coming twenty third in Eurovision.

Their inability to produce a consistent album is a strange predicament. Vocalist Steele's 2003 Lovers album under the guise The Sleepy Jackson showed a masterful knack of George Harrison influenced indie pop, while Nick Littlemore as one half of freakbeat electro act Pnau is not only the catalyst for this union - their brilliant self titled 2007 album contained their first collaboration "With You Forever" (still their best track together) - but also brought Ladyhawke to wider attention on the same LP. The credentials are there, the ability is clearly there, but for now these emperors are yet to truly shine.