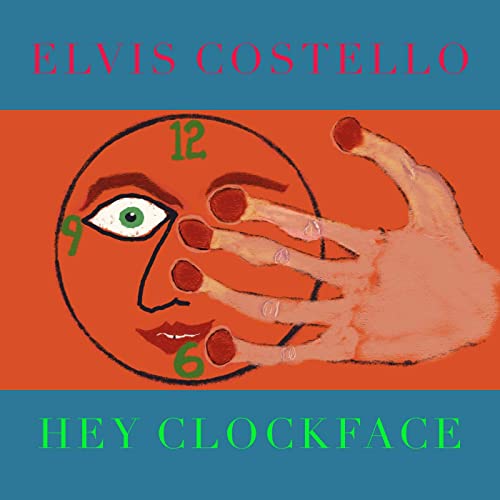 Hey Clockface, recorded and brought to life in Helsinki, Paris and New York, and mixed by Sebastian Krys in Los Angeles, shows that - everything that we think is expected of Elvis Costello - is wrong. It’s
romantic, it’s confusing, it’s intimate, it’s eerie - but above all, it’s exhilarating.

Each track takes on a range of different emotions and dynamics, and the result is something that achieves in its sound the surrealist potency of Jean Cocteau, combined with the rich composition of movie pioneers not too distant from the likes of Georges Méliès.

Because of this, it emits a level of depth that leaves you sometimes not really able to pinpoint what’s what, and other times feeling yourself being drawn in - the likes of “What Is It That I Need That I Don’t Really Have?” and “Byline” will imbue the latter, with a sort of rich tapestry of intimate musings that instantly make you feel transported to the cities in which they were created.

Conversely, “We’re All Cowards Now’ is more insistent and somewhat angry in its demeanour. It’s about experiencing rage and lack of reason; an emotion that resides in most of us but which we all address differently. “Hey Clockface” expresses a similar kind of conjecture, adopting more upbeat tropes and addressing in an almost tongue-in-cheek kind of way the annoyance of how fast - or slow - time goes when you want it to the least.

Speaking of the emotional and dynamic range of the record, Costello said, “I wanted the record to be vivid, whether the songs demanded playing that was loud and jagged or intimate and beautiful.” This is exactly what Hey Clockface delivers - from moment to moment it’s a record rife with unpredictable quips, almost like the world we all find ourselves in today.