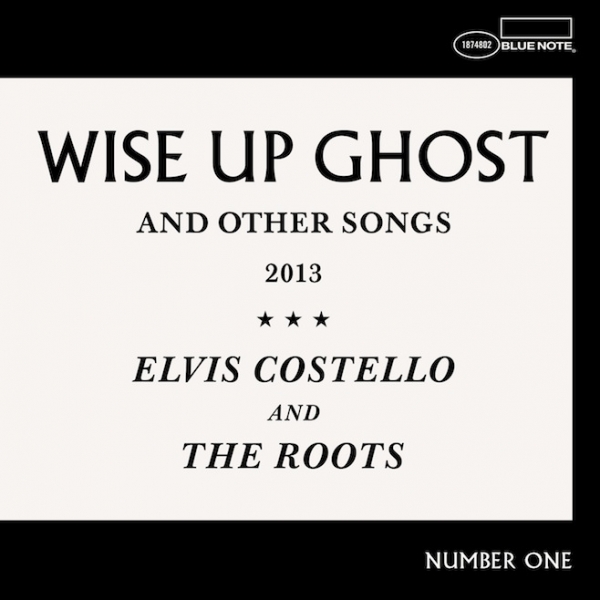 While the announcement of a collaboration between The Roots and Elvis Costello was certainly a surprise, it would be boneheaded to say that there’s no precedent to Wise Up Ghost in either band’s vast careers. Neither act are strangers to collaborations outside of their comfort zone, and it’s fair to say that Ghost doesn’t actually step too far out from certain corners of either band’s ouvre – the lurching loops and swampy textures of Costello’s 2002 effort When I Was Cruel are actually pretty obvious forerunners to the tracks here. In fact, what on paper sounds like a potentially clumsy stab at relevance for Costello and timelessness for The Roots actually turns out, on wax, to be a pretty potent meeting of minds.

So, two facts before I take this any further:

1) The Roots are not trying to be the Attractions.
2) Elvis Costello is Very Much Not trying to rap.

Rather, Wise Up Ghost - released on the seminal Blue Note jazz label and wrapped in a stark, City Lights poetry-style sleeve – is a sinewy collection of some of The Roots’ best grooves, and Costello’s signature blend of observatory bile and jaded travelogues. Sometimes, especially towards the end, the parts don’t quite mesh – the smoky Latino-jazz detour ‘Cinco Minutos con Vos’ is an indulgence too far, while the nursery-rhyming ‘Viceroy’s Row’ sees Costello stretching his vowels over what sounds like a completely different beat from the one ?uestlove is playing.

But these are trifles when compared with the monumental sounds of Ghost‘s highlights; Costello sounds positively breathless trying to keep up with The Roots’ rolling, dubwise beat for Walk Us Uptown’, while the close-miked music-box waltz of ‘Tripwire’ is the album’s best ballad, whose gently swaying delicacy belies some of the albums most ominous lyrics (“Don’t open the door ’cause they’re coming, don’t open the door ’cause they’re here”). Much has been made of ‘Stick Out Your Tongue”s recycling the lyrics of 1983′s ‘Pills and Soap’, but less a case of self-sampling than a wry, timely update (“In time, you can turn these obsessions into careers”) of one of Costello’s most obliquely ferocious songs, over the darkest groove here. You can all but hear the grin on Costello-superfan ?uestlove’s face as Elvis unravels the words.

And then there is the title track, a fucking totemic thing rooted in Morricone strings and a doomed Gershwin piano motif. A kaleidoscopic slow-builder, its six and a half minutes of psychedelic soul mop up the threads of the entire album, from snatches of recycled refrains (copping a chorus from three tracks earlier, a chorus of Costellos shrieks ”She’s pulling out the pin!”, like nervy horror fans at a cinema trying to warn the heroine not to open that door), skitterish drums and the kind of relaxed, lazy vocal delivery that can only come from a man who’s seen it all, and doesn’t care where it all goes from there. If anyone had any doubts about the potential of this album, they’ll all be silenced by the time this track rolls to its conclusion.

Even at its worst, Wise Up Ghost is impossible to hear as anything other than the sum of its parts. Neither band is adapting their playing to the other, yet somehow you can’t imagine the Roots tackling these songs with any other vocalist, nor Costello with any other band. This isn’t mere dilettantism, and while it’s likely to net both acts new fans from the other side of the great genre divide, it holds up more than capably on its own terms. Sure, The Roots have another album due within the next six months, but if Costello does decide to deliver on his oft-made promise to never make another record, this is a pretty fine way for him to bow out.