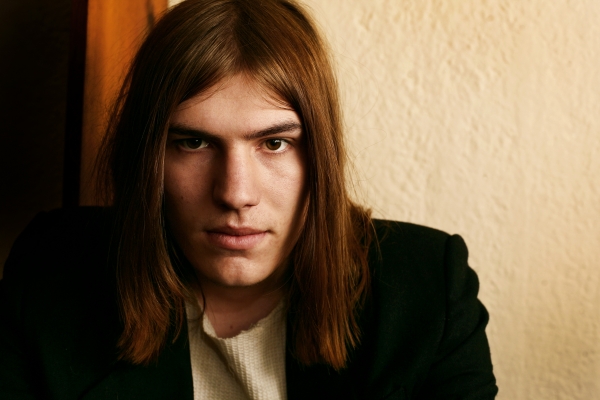 If the ghosts of certain 1970s singer-songwriters hung a little heavily over his 2010 debut album, Pauper’s Field, the new recording from Dylan LeBlanc represents not an exorcising but certainly an often impressive transcending of these. While there is still some glancing over his shoulder at Gram Parsons (among others), Cast the Same Old Shadow, despite its title, has LeBlanc decidedly more driven to take his own musical ideas further than on his first disc. He acknowledges the recent influence of George Harrison’s All Things Must Pass. However, the recording angel that hovers most notably in the vicinity of this new collection is surely Gene Clark, and just as Thomas Jefferson Kaye helped to define Clark’s widescreen perspective on No Other, so here co-producer Trina Shoemaker generously yet never indulgently assists LeBlanc in developing a broader and largely more successful collection than that of two years ago.

The somewhat skeletal, at times rather strained feel of Pauper’s Field here gives way to a more fleshed-out sense – for instance through the judicious use of echo effect in ‘Part One: The End’ – allowing the lyrics to carry greater conviction than did, say, ‘Changing of the Seasons’ in 2010 with its overwrought and overcapitalised sentiments (“Agony Has Been My Friend /As Natural As The Changing Of The Seasons”). And it’s the simple structure of a song like ‘Where Are You Now?’ that allows an unforced expansiveness, as if LeBlanc recognises that striving for effect often only serves to negate it.

A greater self-confidence encourages the development of an adventurously rich but never glutinous string arrangement on ‘Diamonds and Pearls’ (a song written by friend Mus Gillum) that is apposite and more convincing than some of the earlier record’s over-reverential genuflections. The ageing protagonist in ‘Chesapeake Lane’, recalling “those ballroom days”, laments his slide into alcoholism and the tears of the one who left him, yet tellingly resists the urge to over-intellectualise or to “try to see what others don’t see”. It’s this decision not to overload (compared with some of Pauper’s Field) with either stated or implied significances that marks out some of the best material on Cast the Same Old Shadow. However, a flaccid couplet such as “The Ties That Bind Us/The Roads That Wind Us” not only marks an unwelcome (though thankfully only temporary) return of Unnecessary Capital Letter Syndrome, but leads into an unfocused, meandering series of similes (“Like An Onlooker/To Everything Else So Far Away”) in ‘The Ties That Bind’, indicating that the LeBlanc of 2012 is still occasionally inclined towards an unfortunate grandiloquence. By contrast, though, ‘Lonesome Waltz’, has him back to his best, the stripped piano sound beautifully complementing “Let me step in/Where your loneliness is” in a slow surge of credible reassurance.

Pauper’s Field was a journey across the surface of some emotions and some vulnerabilities. Cast the Same Old Shadow is a more exploratory work in a range of ways, psychological and musical, presenting a maturing of ideas, old and new, as LeBlanc works through a crafted and sympathetically produced set of narratives and characterisations. Certainly, there are still times when trains of thought involving recollections of failed relationships roll down familiar and occasionally red-stained tracks and, yes, Ryan Adams’s Heartbreaker inhabits much of the same emotional terrain, but so-called Americana is a musical country of many states and, notwithstanding territorial similarities, LeBlanc’s accent has gained an encouragingly less derivative sound.