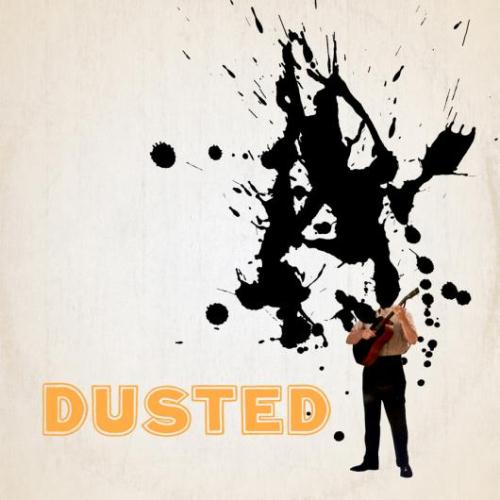 Brian Borcherdt is best known for his role with admired Canadian electronica merchants Holy Fuck who have swept the world with their melodic and ambient sounds. Along the way he’s also managed some more lo-fi guitar-based singing and songwriting, as in the two Remains of Brain Borcherdt records and the ulitimate escape into the woods of 2008 solo outing Coyotes.

He has now teamed up with producer Leon Taheny to form Dusted, and the album Total Dust is the result. Recorded at leisure in Taheny’s garage/studio it occupies a musical landscape that’s many miles away from Holy Fuck. It has a lo-fi, ambient pastoral grunge tone to it, driven by fuzzy guitar and equally fuzzed-up vocals, with lyrics that are almost alt.country in their sense of longing and isolation, and tunes that creep up and grab you through the complex soundscape to stick in your mind.

The tone is set by the opener ‘All Comes Down’. With its Wistful high voice and an aching tune in the chorus, loss is in the air. This segues into ‘(Into the) Atmosphere’ which manages to combine a joyous catchy chorus and jangly guitar hook with an edgy atmosphere. ’Cut them Free’ is a hand-held whirling indie-cinematic song about something disturbing in the trees and in the air between two people. This slightly dreamy lyrical soundscape continues with songs like ‘Bruises’ – full of haunting melody and longing – and ‘Pale Light’, a beautiful ode of regret and incomprehension at the fizzling out of a relationship. ‘Property Lines’ gives a panoramic view of a huge landscape, with catching melody and guitar riffs that worm their way into your consciousness – like the best kind of Neil Young but with a dreamier voice. The title track ‘Dusted’ perhaps best sums up the record – a howling coyote chorus and brooding guitar strumming. The album ends with a quiet ‘There Somehow’ with an almost absent-minded fade out.

This is a great collection whose gritty grunge/pastoral sound and switches from huge vistas to acute personal detail will keep you gripped throughout. Underneath the fuzz there’s real yearning and attractive melody that burns through like sunshine in mist. One to be listened to a lot.