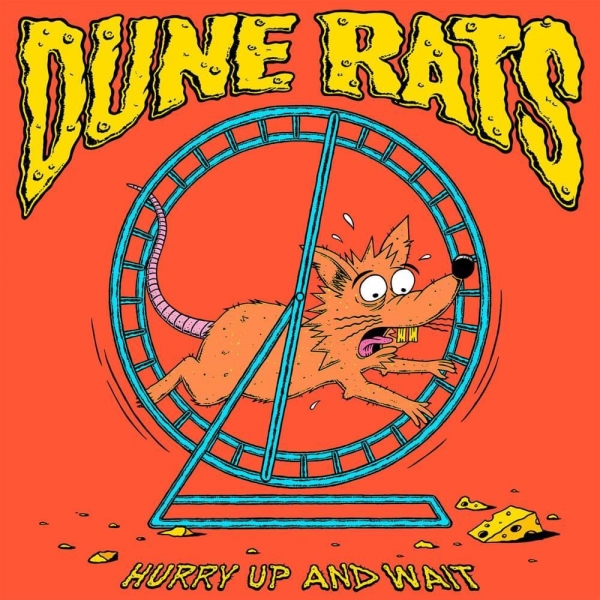 Outside Australia, Dune Rats are the purveyors of the ‘shoey’. Back home they’ve got a number one album. Their follow up, Hurry Up And Wait, once again sounds like a bunch of slackers who can’t stop writing hooks.

In a post-pop-punk world (sorry, folks) the sound of power chords and angsty lyrics is enough to get your eyes rolling. It's hard to say what makes Dune Rats different but there's something about the empty tins, DIY parties and board shorts that actually makes them believable.

Music videos are hardly a gospel reference but the band's visual for 2017 single, "Bullshit", has the wildest atmosphere since "Fat Lip"—the music video that inspired a movement in partying. While part of the band's attraction is being those kids who always know where the party is, their ear for addictive choruses and universally adored lyricism is what's helped them pass the test of time.

Hurry Up And Wait isn't anything new for fans. "Rubber Arm" is an addictive singalong, "No Plans" is a power chord-filled anthem and "Bad Habits" is a lyrically tongue-in-cheek song brimming with gang vocals. Rewriting the book wasn't and has never been on the mind of Dune Rats though. Rather than spend a month living in Rick Rubin's Malibu studio or go for writing sessions with Max Martin, The Brisbane-born party animals jumped back in the shed with a few friends (producer James Tidswell, engineer Mitch Kenny, producer/songwriter Miro Mackie and mixer Mike Green). It didn't take them long to crank out the 12 tracks that make up Hurry Up And Wait.

While they're happy to announce they still love smoking weed ("If My Bong Could Talk") and sometimes lament an achingly relatable form of uselessness ("Rock Bottom"), keeping the process local doesn't mean they're talking about the same old problems all the time. Since The Kids Will Know It's Bullshit the band have had the chance to rub shoulders with bigwigs in LA inside and outside of the music industry. Seeing the way people live in excess there is what inspired their heaviest single, "Crazy". "Took a bunch of X's now you can't get Z's" singer Danny Beus croaks in the middle of the 3-minute track.

While Dune Rats' synonymy with party culture may make it look like the pot calling the kettle black, seeing the other side of that world helped mature them in some small and briefly recognisable way. While there's no sign of a teary ballad or piano-led duet, there's a self awareness on this record that creeps through in pieces on "Patience" and "The Skids". This is immediately juxtaposed by the album intro featuring a voicemail from a friend explaining how excited he is to "snort bags" with the band.

Truth be told, it's hard to review an album like Hurry Up And Wait. In a musical climate that demands lyrical substance and cultural relevance, Dune Rats remain an anomaly. ”We don’t want to be the ‘Scott Green’ band forever," claims Beus. "We didn’t set out to make a big album, or a polished album, or an album about partying because the last one did alright." While you could write off this album for not attempting to push any musical boundaries, there's an authenticity to their relatable lyricism that gives reason to their polarising popularity.