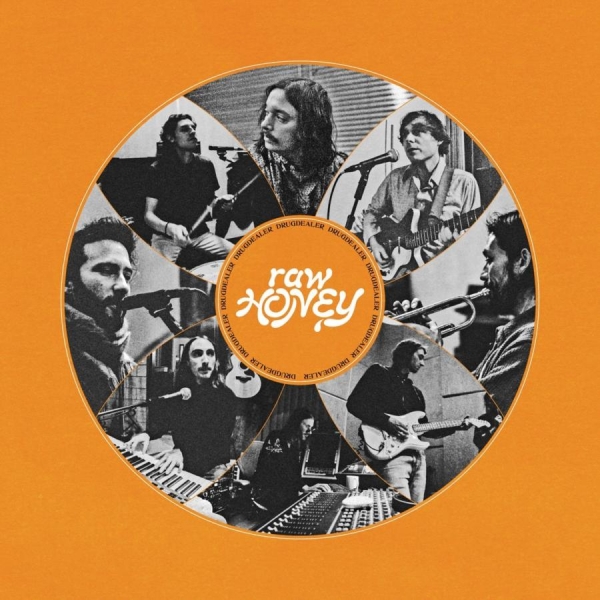 Raw Honey is a rarity of a record: it’s the glint that catches your eye, the double-take – a curiosity, hidden in plain sight.

Drugdealer’s second album, engineered by none other than Mac DeMarco, turns its back on modernity, instead upcycling styles and genres that have formed the foundations of our listening history. Less of a record, perhaps more of a time machine, Raw Honey sees the reawakening of vocal harmonies, pure instrumentals all interwoven with an irresistible psychedelic streak.

Drugdealer, though focused on Michael Collins who has dabbled in collaborations with Ariel Pink and Weyes Blood, is better described as a collective, drawing on a plethora of musicians and skillsets. Collins, who had never so much as picked up an instrument – let alone received any semblance of formal musical training – began his experimentation with music in 2009 after roaming the US on a freight train. After a brief spell crafting sampledelia, Collins made a conscious decision to shed his endeavours in abstraction in favour for traditional songwriting. It was then, you could say, that Collins’ love affair with retrospective sounds began.

Raw Honey is the natural successor to Drugdealer’s 2013 debut, The End of Comedy. The transition is seamless. Honey, which taps into the low, dulcet vocals of Weyes Blood’s Natalie Mering, is sultry and warm like a hot summer’s day. It has a drowsy pace, that passes like a gentle breeze, which, when coupled with the soaring guitars, makes the lyrics all the more wistful. “I know that you want to be free / Want to be wild / Oh, to be hugged just like a little child”, Mering laments.

The record is distinctly ‘American’ in style, with an almost opalescent quality, shape-shifting between decades of influence. It would be forgivable to have their influences masted to their sleeves, but Drugdealer feel almost like a mimicry of their predecessors. "Lost In My Dream", though a delight to the ears with its lush brass sections and grin-inspiring tempo, is reduced to nothing more than a Beach Boys manqué. "Lonely", with its jaunty piano, laden with “ooh”s isn’t a thousand miles away from The Hollies, either.

Even the more plaintive tracks, "If You Don’t Know Now You Never Will" and "Wild Motion", though it has to be acknowledged are cinematic soundscapes with luscious riffs, feel as if they trade penny-store sentiments because they, like the rest of the album, walk such a well-trodden path.

The strong sense of psych-rock, which bleeds throughout the record, is executed to perfect. The skill required to execute this kind of instrumentation is nothing short of perfection – if you appreciate the stark, bona fide sound of a guitar, or the crisp sound of a piano, then you will revel in Raw Honey. It’s an album that feels made for technical appreciation, rather than necessarily engaging the listener. It will divide listeners: Raw Honey will alienate musical trailblazers, but draw closer those looking for rose-tinted retrospect.