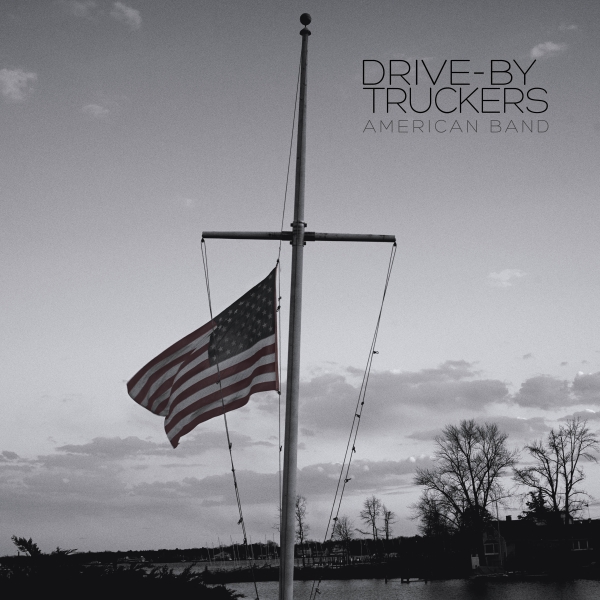 “Go sing this song at the next cop’s funeral thats shot by Black Lives Matter.﻿”

“This is some preachy stuff. It’s one-sided. It’s cliched. It really doesn’t even attempt to find any middle ground.”

“This band used to be good. But now they’ve sold out to the politically correct bullshit society.﻿”

I've long avoided reading YouTube comments, but there was something about "What It Means", the second track to be lifted from Drive-By Truckers' new album, which got me curious. A deceptively understated, almost breezy-sounding track at first, the song spends six minutes brutally describing the incidents which led to the rise Black Lives Matter movement, but naming no names. Patterson Hood's cracked, mournful vocal is charged with emotion as he reels off his view of the situation.

Every line of the song is painfully insightful and slogan-worthy - "we trust science just as long as it tells us what we wanna hear" - though its most wrenching moment is the hole Hood leaves in the narrative after describing the death of Trayvon Martin, "dead and buried, and laying in the ground with a pocket full of Skittles." For once, the silence in a Drive-By Truckers song says more than words ever could.

To read these comments about "What It Means" would suggest that many DBT fans have simply volunteered to ignore the liberal leanings of the band's lyrics. Yes, they pledge allegiance to Lynyrd Skynyrd, and they come from Alabama, but this is a group who have spent their entire career wrestling with the stereotypes associated with the South, and written countless songs attempting to redress that balance.

It's strange to think that the mistaken notion of Drive-By Truckers as beer-swillin', Confederate Flag-wavin' rednecks could be shared by both their harshest detractors and most devoted fans, but...well, to quote Hood, such is the duality of the Southern thing.  He may now live in Portland and renounce his former use of the Stars and Bars, but that doesn't mean he's all that different from when he formed the band with Mike Cooley twenty years ago. It's just that their focus has widened - in a decade where the band's home country has embraced its darkest timeline, the Southern thing don't seem quite so important anymore.

"Compelled but not defeated," runs the chorus of "Surrender Under Protest", the album's charging lead single, which obliquely but insightfully dissects the hotheaded fingerpointing which can be found on both sides of the political spectrum. It sums up "American Band" as much as it does the state of the few true believers left in the States, though after November 8th, who's to say what comfort Drive-By Truckers and their fans are going to be able to take from that rallying cry.

Recorded in the thick of the US presidential primaries, it's also the first Drive-By Truckers album to take place almost entirely in the present tense. A soulful ballad towards the end of the LP emphasises the futility of banning art in times of crisis, summing up the Iraqi invasion with heartbreaking simplicity: "Once they banned 'Imagine', it became the war it was when we were kids."

Cooley's compellingly anthemic opener "Ramon Casiano" bucks the trend by excavating a news story from the thirties in which a teenage Mexican boy was shot by a white man who went on to become head of the NRA. The story itself is old, but its message ("It all started with a border, and that's still where it is today" runs the opening line) is as current as ever, while the decision to title the song after the victim but never once name his killer has poignant parallels with the post-Black Lives Matter #saytheirname movement.

And while it may have been recorded before some of the more unthinkable moments of the election,  it's hard not to think about Third Eye Blind's fantastic fuck you of a performance during the Republican National Convention whilst hearing "Kinky Hypocrite", which chastises the excesses of the powers that be to a sleazy barroom shuffle that wouldn't sound out of place on side three of "Exile on Main Street".

The band's musical palate hasn't expanded quite as much as its scope; "Darkened Flags on the Cusp of Dawn" coasts by on a trademark lumbering Hood riff, while "Filthy and Fried" welds its pseudo-feminist message ("Now girls collect trophies as much as the boys, and come home just as filthy and fried") to a near lawsuit-worthy crib of "Mr Tambourine Man". The few additional flourishes are subtle, like the chiming marimbas on "Guns of Umpqua", which attempts to reconcile the horrors of the new American century with the joys of simply getting on with day-to-day life. Meanwhile, "Ever South" is decorated by that most un-DBT of things - a synth line - while finding a new spin on the Southern thing; a reminder that America is a place where everyone's trying to "lasso brighter futures," regardless of where you or your ancestors originaly came from.

"American Band" is Drive-By Truckers' eleventh record and, while it couldn't be by any other band, in many ways, it's an outlier. Wes Freed's recognisable Southern gonzo paintings which usually grace their album sleeves have been replaced by a muted photograph of the Stars and Stripes flying at half-mast. Indeed, everything about "American Band"  is stark and solemn, its brevity being much needed in a year where the band's home country seems to need its bullshit filter replaced on a weekly basis. "American Flag" is a monochrome "Nebraska" in a discography of technicolor "Born to Run"s.

If that means they've sold out to the "politically correct bullshit society," and are going to start hemorrhaging fans, than so be it. It just means the deserters will have missed out on their former favourite band's most streamlined and forceful album to date. To labour a tired point, such is the duality of the southern thing.