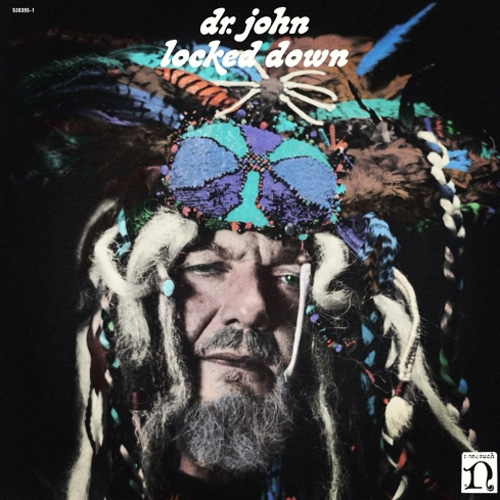 “It’s 1969, 1974 and 2012 all at once”, proclaim the liner notes to the latest LP by New Orleans legend Malcolm “Dr John” Rebennack, and it’s true in more ways than one. Just as Locked Down sees John come full circle and explore once again the heavy funk-R’n’B of his early days, it also taps into and comments on a world that feels now more chaotic and ripe for revolution than it has done for decades. Drawing on both his many years’ experience and his voodoo-prophet persona Dr John sounds right now like the ideal guide to the mayhem, and in Locked Down he has created a record which deserves be – to borrow a phrase of his – “everybody’s business”.

Focusing Dr John’s weary, righteous fury is producer Dan Auerbach of Ohio garage rockers the Black Keys, who apparently sought out Dr John with the explicit intention of “getting a mainline to that old mojo”. Auerbach’s role is much more than just hero worship, however: his solid guitar work is key to more than a few songs and his youth and verve injects Locked Down with just the right dose of modern sensibility. Both vocally and through his bluesy keyboard playing Dr John remains front and centre and all times, but the step up in quality from 2010′s already strong Tribal is testament to the strength of this wise new collaboration.

As with much of the output of the Black Keys, there are moments in which Locked Down feels like a newly-unearthed relic of past times, but even besides Auerbach’s contribution there are plenty of elements keep the record rooted in the here and now. Unsurprisingly released as a single, ‘Revolution’ articulates John’s rage at the “blind eyes of justice, deaf ears of power dumb moves of money” that characterise the financial crisis, while the grim ‘Ice Age’ deals bluntly with the suffering and hopelessness it leaves in its wake. The young but rock-solid musicians Dr John and Auerbach have drafted in keep everything as dynamic as you’d hope – drummer Max Weissenfeldt in particular is a real thrill to hear.

Thankfully, Dr John has sacrificed none of his unique personality in making such a determinedly 21st-century record. Indeed the album’s strongest cut, the remorselessly funky second-side highlight ‘Eleggua’, is absolutely in tune with the good doctor’s penchant for exotic spiritualism. Named after the Yoruba deity of chaos and trickery, it is both a great fit for the themes of discontent present on the rest of the album and a perfect outing for the McCrary Sisters, a backing vocal trio who add so much to the track.

By the time Dr John has gone on to discuss both his love for his children in ‘My Children, My Angels’ and his relationship with the main man upstairs in rousing gospel-esque finale ‘God’s Sure Good’, Locked Down has taken us on a real journey. Here a musician who has been there and done that offers a new musical and personal perspective on problems which, like John himself, got started decades ago: but especially thanks to the grounding presence of Dan Auerbach, the future looks just a little brighter after Locked Down.