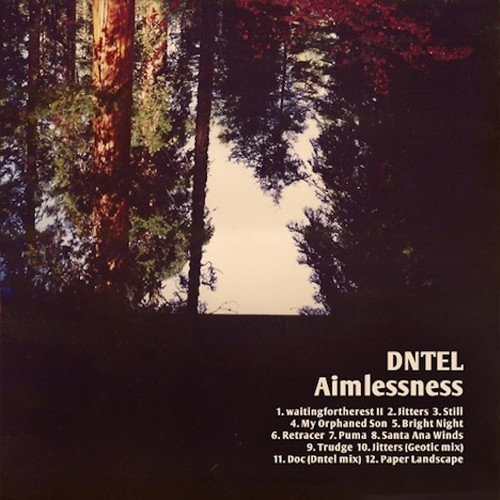 Member of the electronic music old guard Jimmy Tamborello once again proves himself a deft hand at subtly manipulating mood and tone with his latest effort, Aimlessness. Beat-less opener ‘waitingfortherest II’ demonstrates this early on – its nebulous collection of sounds morphing into one another, with no obvious goal, direction or, dare I say it, aim.

Having done the internet-rounds early on, ‘Bright Night’ remains the one of the most enduring tracks in this collection. Distorted brass lines interweave erratically with a battalion of synths, and it’s some time before it all locks into place. At the same time, it’s the completely unique quality of much of Tamborello’s sampled sound that remains his trump card. In one instance, you have a noise which sounds like a dial-up modem melting slowly in this unceasing heatwave, cropping up two-thirds of the way through ‘Bright Night’. Later, the booming acoustic piano of ‘Puma’ also sounds of no obvious derivation, itself offset by distant strings and noodling synth, before collapsing into a minimalist groove. But Music for 18 Musicians this is certainly not: there are too many ideas here, too much continual exploration and variation.

As we know, it’s Dntel’s collaborations with vocalists that have produced the most enduring and widely-adored of his work. On Aimlessness, it’s the turn of Baths’s Will Wiesenfeld to step up to the microphone. The pupil-dilating ‘Still’ sounds like a record caught in its own groove, the pulsating sensory overload of a rabbit warren nightclub, all distorted fairytale nightmares. “Come home…” echoes Wiesenfeld’s unrelenting lyrical motif. But ‘Still’ isn’t Wiesenfeld’s only contribution on Aimlessness. He also provides a counterpart to ‘Jitters’ in the form of a remix under his ambient moniker Geotic. It’s a gently immersed gem; crackling whitewash waves underpinning the 16-bit melody of Tamborello’s original.

Elsewhere, ‘Santa Ana Winds’ will surely melt the iciest of hearts, delicate and wispy flute lines augmenting the track’s carefree sentiment. “It’s me again…” come the guest vocals from California’s Nite Jewel, like the welcome re-emergence of a forgotten acquaintance. ‘Retracer’, on the other hand, sounds like an hopeless attempt to recollect the memories the morning after ‘Still’, but there’s too many contradictions here to trace a single, distinct outline of the previous night’s proceedings. As the track fizzles to a close, those reflecting synths affording the track a particular sense of space, you can’t but feel that Tamborello’s none the wiser.

Ultimately, it feels as if “aimlessness” is an accurate description of the album. There’s no grand, overbearing theme or intention in this music – Tamborello’s simply applied his palette to thirteen separate tracks, and on each one he’s created a distinct but always captivating splash of colour, full of depth and intricacy. Every one sets up a fundamental groove over which Tamborello can explore, manipulate, add to and subtract from, and the result is remarkable. Each track a capsule series of variations on a theme, Tamborello has proven himself once again to be one of the most innovative exponents of electronic music.