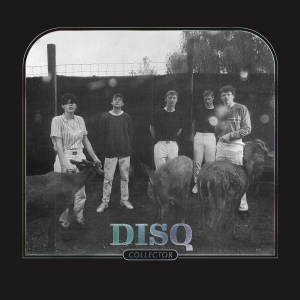 Since initially drawing attention via their two singles “Communication” and “Parallel”, which featured on Saddle Creek’s Document Series in 2017, Disq have undergone a period of growth in more ways than one.

Not only have their fanbase and capabilities increased, but their personnel has also blossomed from a measly duo to a mighty collective of five. Still driven by the original partnership of Isaac deBroux-Slone and Raina Bock, the band has since added Shannon Connor (guitar/keys/vocals), Logan Severson (guitar/vocals), and Brendan Manley (drums); all musicians they’ve met playing around their home city of Madison. Helping the band develop beyond the Tame Impala-debted debut Slone and Bock released on Bandcamp back in 2016, their new full-length, Collector, is a reflection of that change.

Despite Disq's previous exploration of psych-pop, Slone’s lyrics and vocals always felt like they lended themselves better to the power-pop the band have since adopted. Largely wry and sardonic, Slone sounds every bit the irreverent and disillusioned young adult you suspect he probably is. “D19”, an intentionally cliched, though quite affecting love song to his favourite microphone, is an apt case in point, its self-awareness proving to be its saving grace. Elsewhere, we are also treated to regular instances of what is clearly a key feature of Slone’s repertoire: self-mockery. On “Loneliness”, he sighs “All I wanted was some loneliness / guess I’ll have plenty of it soon”, that last thought delivered with more than a hint of anticipation. Slone seemingly revels in this sort of self-flagellation, keen to at least attempt to laugh at his pessimistic preoccupations.

There are times when the humour runs dry, however, and it’s impossible to escape the innate sense of apathy and sadness that permeates the record. At times subtle, though often not, as encapsulated in lines such as “I believe in anything you want me to see / I don’t care if it’s real or pretend” from “Gentle'' in which Severson tackles the correlation between mental and physical health. His ongoing frustrations and isolation feel better placed within the more frantic instrumentation of the band’s current iteration than their hazy psych. The mechanical “I Wanna Die” aside, Collector expresses not only the apathy but the angst of youth, a conglomeration of both paralysing paranoia and untameable energy.

This interplay is evident from the off with opener “Daily Routine”, concerning itself with the brain-numbing monotony of the standard 9-5 while Slone does his best to capture the bored distaste of Andrew Savage. At the other end, closer “Drum In” sees Slone at arguably his most rudderless, struggling to cope with a lack of direction and inaction. Throughout Collector, his erraticism is equally thrilling and disturbing, mirrored by the similarly erratic variances performed by the band around him. It’s gripping stuff, providing an insight into a mind that also feels reflective of much of today’s misplaced youth.

Not unlike Dutch trio The Homesick, Disq’s experience of forming and developing in a state of relative isolation, in their case in the flyover city of Madison, has undoubtedly informed their journey thus far. The expansion of their band members, their lack of inhibition and creativity in their sound; while not restricted to acts from a similar background, theirs has definitely been aided by such circumstances. The direct intimacy with Slone’s inner-thoughts, witnessed both in terms of its creative flourishes and depressive ramblings, is also indicative of this vividly local feature. It'll be the challenge of managing this aesthetic as they continue to grow, especially following the release of such an excellent record, that could prove central as to where they head next.