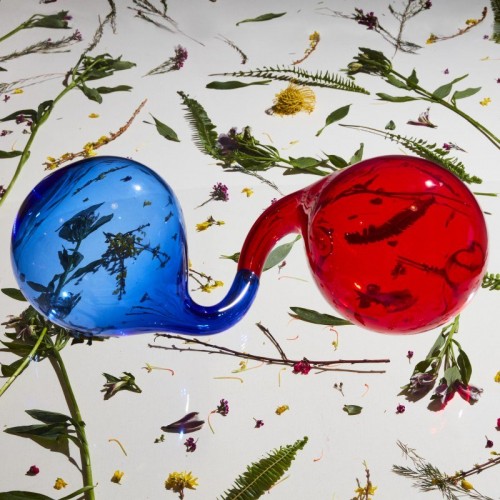 With album art throwing back to 2009 record Bitte Orca and 2004’s Slaves’ Graves & Ballads, the new record by Dirty Projectors is a kaleidoscopic peacock of an album littered with guest stars. It’s heavy and intense from a sonic perspective but comes up short when compared to the cloudbusting highlights that seemed to ooze from every pore of their 2012 record Swing Lo Magellan.

“Break-Thru”, the second track, is so cluttered that it becomes hard to follow anything after about fifteen seconds: an unidentified instrumental squonk runs through the entire song, and bounces off winding, buoyant Vampire Weekend/Graceland guitars. The disappointing thing is that it sounds like someone ‘doing’ Dirty Projectors rather than the actual folks themselves.

When David Longstreth & Co. strip back the layers – as they do on “That’s A Lifestyle” – magic happens. A beautiful acoustic ballad filtered through DP’s signature bizarre lens, its restraint highlights a delicate touch sorely missed across most of the record.

The hyperactive Beck-isms of “I Found It In U”, along with Longstreth’s best John Lennon impression, make for an album highlight. There’s a ballad buried beneath the thick layers of mutant funk – and what a beautiful, elegant thing it is. Underneath the irritating sibilance of the cymbals and the ripping Thin Lizzy guitars lies a pretty little love song.

The sexy grooves of “What Is The Time” brings Longstreth’s Prince fetish to the fore, and adds a concentrated Beatles-esque psychedelia to the mix. “You’re The One” (featuring Robin Pecknold and Rostam), is easily the most restrained thing on the record – a lightly strummed acoustic guitar is the backdrop for gorgeous harmonies – it could easily have been on Imagine or Double Fantasy.

Closer “(I Wanna) Feel It All” pleasantly recalls the smoky, incense-soul vibe of Solange’s A Seat at the Table – a record Longstreth had a hand in producing. It’s a grower.

However, the wheels start to fall off on “Zombie Conqueror” (feat. Empress Of), which is essentially a heavy metal workout with Lars Ulrich drums and cape-wearing prog dynamics. It’s an odd one, for sure, and it certainly showcases Longstreth’s risk-taking, boundary-pushing ideology. It just doesn’t work in the context of this record.

The album feels significantly longer than its 37 minutes, and despite its relative brevity, there’s no sense that you’ve been allowed to relax at any point here. The softest tracks are still jammed to bursting with little details and things spiralling all over the place.

If you’ve ever found yourself awake for significantly longer than you intended to be, with your eyes fit to bleed, your head fixing to burst, trying desperately to make it to your bed with no respite in sight, then you’ve essentially lived Lamp Lit Prose. It’s a skinny vanilla mocha frappuccino when all you wanted was a filter – it’s an overdose of things that would, individually, be fantastic, but are made lesser by their combination.

David Longstreth can make excellent records – he’s already made three or four. But this isn’t one of them.