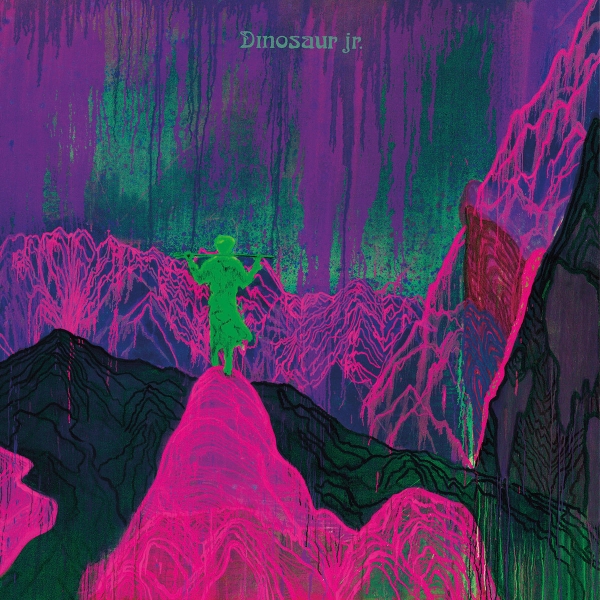 The old comedic question is, “You wouldn’t hit a guy with glasses, would ya?” Don’t look now, but bespectacled trio Dinosaur Jr levels their own unwittingly potent blow with their latest, Give A Glimpse Of What Yer Not, their fourth LP since the band’s unlikely reunion now a decade ago.

Dinosaur Jr’s comeback LP, 2007’s Beyond, was a hugely unexpected return to form, wholly unsurprising in its sound, a tour de force in confidence, urgency, and conviction as if the band had never strayed in the first place.  Follow-ups Farm and I Bet On Sky had the trio stretching out and diversifying their instrumental palette – a relative exercise for a band as staunchly rooted as Dinosaur Jr – respectively, yet marginally bogging down the qualitative success of Beyond rather than building on and exceeding it.

As such, Give A Glimpse is the leanest of Dinosaur Jr’s post-reunion albums, paring back both its prior albums’ tendency to wander and fussy augmentations. Featuring hooks the size of Cape Cod and an inextricable entwining of Byrds-ian jangle pop into their typically fuzzy crunch, Give A Glimpse may well be the band’s warmest record, sacrificing none of their gut punch force nor J Mascis’ six-string virtuosity.

The album’s first half gets back to Beyond’s limber, conventionally riff-based fare, albeit with a greater pop sensibility than we’ve ever known from the band. Generally high-quality Dinosaur Jr-by-numbers, Mascis’ lightning bolt soloing counterpointing his introverted drawls, one gets the feeling they could churn this stuff out eternally.  Lyrically, Mascis is his usual lovably directionless self throughout, positing “what went wrong?”, singing of “crawling around” and being “lost all day”, yet he never met a dead end that couldn’t be cracked with a guitar solo.

The wooly mammoth-footed epic “I Walk For Miles” serves as Give A Glimpse’s hinge point, Mascis largely eschewing his power-pop guitar heroics for a more textural approach across its second half. Aside from “Knocked Around”s rousing coda, the trio is firmly entrenched in mid-tempo ballad territory and, as disconcerting as that woeful description sounds, it’s where they achieve absolute understated triumph. Mascis and company are utterly lithe and sweet on “Lost All Day” and “Knocked Around”, Mascis’ melodic runs woven into the fabric of the songs.

Give A Glimpse’s lone missteps unfortunately belong to bassist Lou Barlow, the clichéd psych-folk of “Love Is” and clunky “Left/Right” both falling flat. That said, any doubt of the relevance of Barlow’s  (and Murph’s, for that matter) contributions to the band as a whole are easily cast aside by simply bearing witness to the quality of the reformed band’s work here and since Beyond, their rhythm section providing Mascis an ever-reliable anchor and catalyst.

The expectation of surprise and growth must be a tempered when it comes to Dinosaur Jr; one has to give credit for the band lighting on a sound that is readily identifiable and consistently works.  We could very well settle on designing a review template for the band, slapping an 8/10 on it and using that henceforth. Yet, Give A Glimpse Of What Yer Not is more than just a routine 8/10 Dinosaur Jr album, it’s their most satisfying and realized post-reunion album yet.  Hopefully we’re set up for even greater things next time round, but we at least know we won’t be disappointed.