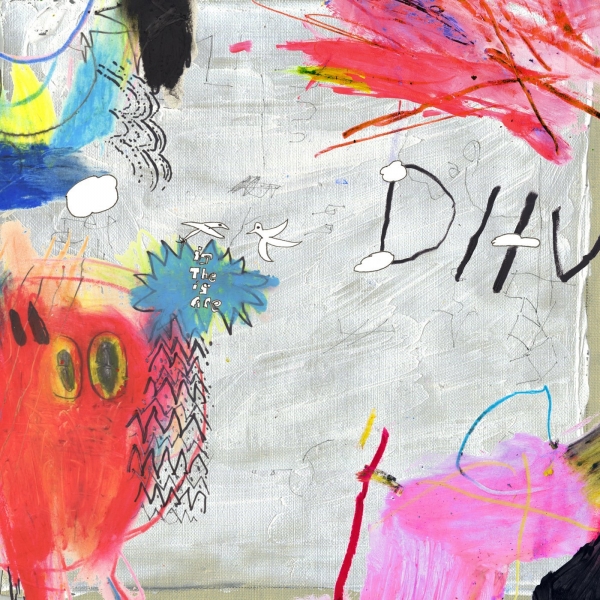 After the success of Oshin, DIIV 2012 debut , it’s safe to say subsequent intentions for this Brooklyn four piece haven’t gone according to plan. It’s a rarity for a new band to spend four years following up a debut, that time hasn’t been spent musing over analogue equipment and musical minutiae, rather dealing with a catalogue of mishaps.

With a chaotic gestation period such as this it isn’t surprising that Mike Sniper, head of their label Captured Tracks, stated in a recent interview with Pitchfork that “the material wasn’t there”. This album was literally torn from Smith to stop his endless tweaking. Is The Is Are needs attention; it’s over an hour long, and at seventeen tracks, it is in essence a double album.

Is The Is Are is split into two specific factors. The first half finds DIIV at their most accessible, which could be misconstrued as the album being front loaded with ‘the good stuff’. That’s definitely not the case thankfully, as the latter half is unpredictable, much more challenging, and rewarding.

This isn’t a one off either, “Bent”s is a tale of addiction and loss gone pop (“I saw you with a very loose grip on your tight ship”), sliding deeper into the depths as Smith drawls “If it feels wrong you can go along/ but once it feels right you’ve lost the fight”. The first single from the album; “Dopamine” contains the kind of earworm Vampire Weekend would kill for, while Ferreira takes the lead with a seductive moan over insistent dirgy riffs on the cold as ice “Blue Boredom”. The cut up lyrical style and icy detachment is pure Kim Gordon - in fact, late ‘80’s era Sonic Youth hangs over the entire album.

The gorgeous chiming “Healthy Moon” is dreamy and vulnerable, “Dust” is a great big fuck you with an almost rapped vocal “I’m too fucked to die in a world of shit/I’m trying to keep quiet but I can’t move quick”. The crescendo of guitar feedback makes this a thrilling highlight of a very long listen.

The thunderous percussion of the title track accompanies a message of hope, a glimmer amongst the murk. If “Last time I walked down this street I wanted to die/ Now I’m fighting, fighting for my life” isn’t the kind of self-help mantra Smith learnt during his time in rehab, it should certainly be used as one for future inhabitants.

Where Oshin was bold and robust, we have a very different DIIV here; fragile, world weary and battle ravaged, the ringing in their ears echoing the hopeless desolation of The Cure’s Disintegration era, the insistent drive of old La Düsseldorf albums, John McGeoch’s genius guitar work on the early Magazine albums, the minimalism of Mission of Burma, a shoegaze vagueness through by vocal reverb. At times they’re totally bummed out, others fizzing with a kind of synthetic joy, amongst stories of loss and despair, there are tales of optimism through recovery.

The nature of a double album means it’s either a glorious artistic statement, or a sprawling mess of self indulgence. An act such as DIIV is so unassuming that it couldn’t be the former, but nor is it the latter. Yes; Is The Is Are is overly long, and they very much stick to their musical template throughout, but it’s crammed with great tracks. Safe to say Smith’s dreams of making it Kurt Cobain size are currently not on the cards, Is The Is Are being one of 2016’s best rock releases, however, is a different matter.