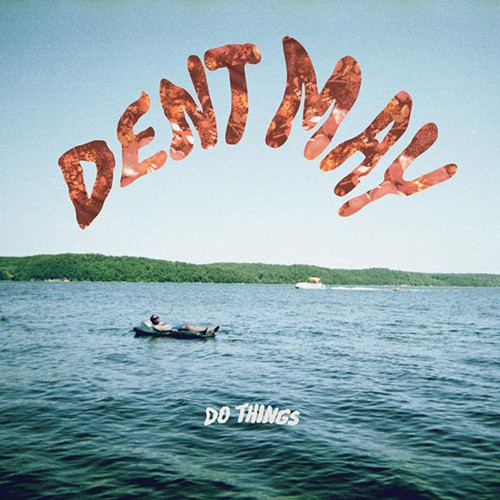 “Parents, we don’t wanna be just our parents”, Dent May coos about half-way through his second record, Do Things. Those unfamiliar with his music might imagine the line delivered with a punkish snarl, but instead it’s sung with a dorky gulp in the style of milk-fed doo-wop groups, and – incongruously enough – accompanied by chicken-scratch guitar and wan, swirling synths. It’s a pastiche of several styles that, instead of an inter-generational rebellion, ends up sounding like being trapped inside someone’s dream of a buddy movie shot through a Vaseline-smeared lens and watched on VHS.

Promoting his debut, Dent May & His Magnificent Ukulele – a comparatively stable record where he played the titular instrument on every song and sang tropicalia-infused lounge pop – May boasted that he didn’t want people to “be able to pinpoint when came out or where I’m from”. And a short while into Do Things it becomes clear that achieving that is less about making new and more about obscuring and collaging his influences into a kind of timeless, uncanny sunshine pop soup. Like Paw Tracks labelmate Ariel Pink, May is something of a pop archaeologist, studying music and nostalgia from an academic – often ironic – distance.

And there’s nothing wrong with nostalgia. In the history of pop, the number of songs about past loves come a close second to songs about unrequited love, and far from the museum-y reenactments and decade do-overs favoured by some of his peers, May’s creative process seems to be born from questions like “What if Pet Sounds-era Beach Boys liked funk guitar and had vocoders to play with?” Rather than “What if we play old Joy Division songs?”. The result – at its best – is a kind of pop Narnia of wilfully uncool music made between 1955 and 1986, a schmaltzy paradise where punk never broke. ‘Rent Money’ ambles along with doo-wop vocals, and synth filigree before launching into an ELO-style bridge; ‘Best Friend’ offers guitar and a breezy, laid-back ’80s vibe that brushes up against May’s saccharine vocal; and ‘Fun breaks into an imitation Brian May solo three quarters of the way through amid all the drum machine splutters.

Like Narnia, it’s not all great; ironic or not, the protagonists in Do Things’ songs have taken a turn for the nice. On Magnificent Ukulele the schmaltz was often tempered by a raft of southern sophisticate narrators who offered wry observations on a parade of privileged individuals straight from a Walt Stillman film. That deflating irony is absent on Do Things, and it can all get a bit sickly; on Wedding Day, May offers reassurances to a lonely woman (“Ever since you had your first at school/You’ve been searching for somebody that’s cool”); on the aforementioned ‘Best Friend’, he declares his undying like for his pal (“You and me are never gonna end/Cause you’re my best friend, honey’). The white-picket-fence loveliness of it all could still be ironic to some degree – the idiots in his songs are now the singers, rather than the characters being sung about – but once you’re 30 minutes into it, it hardly seems to matter.

Like the scare quotes that pock his music, there are many clauses that will determine whether you can bring Do Things into your heart. Fans of straight revivalism – Tennis, The Vivian Girls etc – might find it too smart and self-conscious, while those who read and agree with most of Simon Reynolds’ Retromania will sigh at the arrival of another derivative band. We live in post-productional times! The tumblrization of music continues! Despite its wholesome pop sensibility, it’s not an easily loved record: for every person charmed by its apparent sunny disposition and reverence to the past, there will be two who either find it all too cheesy or ironic to stomach. Of course, the latter group would be easily won over if the songs on Do Things were better. There’s nothing of the quality of ‘Meet Me in the Garden’ here, and though a record of all-new material is always welcomed, the absence of ‘That Feeling’ and ‘Eastover Wives’ from his 2010 Forest Family 7″ is conspicuous. As it is Do Things feels like a transitional record. More than a crooner, Dent May seems interested in filling the niche of a pop star that plays demented, atemporal, homemade wedding disco. Because of that ambition Do Things’ glitter ball Oz is an interesting place, if a bit monochrome.