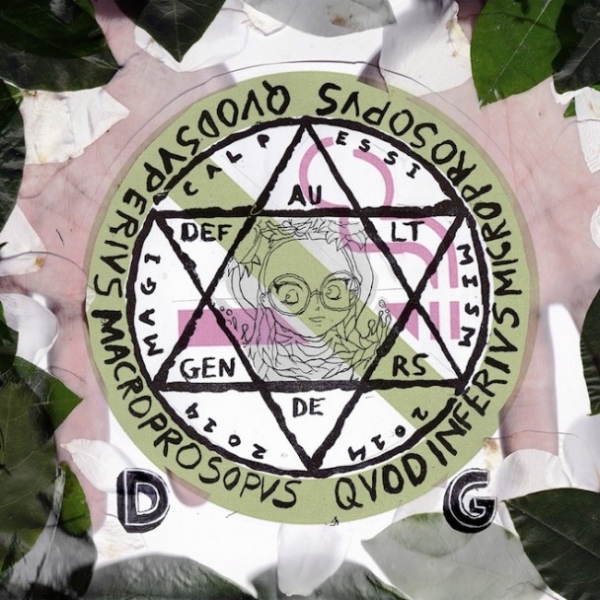 So far, James Brooks’ solo artistic career has been uncomfortably lived out online. Under the moniker Dead Girlfriends (inspired by feminist Andrea Dworkin) he released an EP titled Stop Pretending in 2013, only to be tailgated by a flurry of negative thinkpieces and tumblr blogs regarding “On Fraternity”, an anti-rape culture song Brooks penned using the second-person pronoun ‘you’. Many felt because of that Brooks was trying to speak for them on a sensitive, important subject when they really didn’t need him to. The narrative became not about the music on Stop Pretending, but instead Brooks found himself cast as that week’s online newscycle victim – with all the backbiting, hyperbole and outrage that involves. He swiftly changed the name of his project to Default Genders and disappeared as quickly as the online furore unspooled.

Almost a year to the day later Brooks uploaded Magical Pessimism 2014 to Bandcamp and sent a few tweets announcing the release of his first full-length record. It was an understated unveiling of what is a startlingly well-realized album that true to the concept it twists in name (Magical Realism) creates a world within a world to hide in.

Opener “Everything Is a Lie and Everyone is Completely Full of Shit” introduces the blown-speaker, hyper-romantic sound that characterizes the record – the song’s gorgeous mid-section of strings and faraway pianos has a sense of Disney wonder to it while Brooks buried vocal longs for escape.

Lyrically the record is unerringly honest and personal, but it has a way of feeling like it could speak directly to the heart of anybody alive in 2014. Lines like “I had a dream that, one day I showed up, at where you work, and I paid all your student loans off, like it was nothing” on “Sophie” is probably the sort of boring fantasy a good portion of young people might have but not tweet about. Same goes for the almost drab admission on “The Trees in the Driveway” that “You have to take out your piercings before you go to work, but otherwise they’re pretty cool about the way that you dress”. That plainspoken quality is interjected by the music’s complete otherworldliness, throwing itself between fits of violent breakbeats and noise, and an almost orchestral beauty (especially on “Omerta”, an instrumental that props up the middle of the album).

The visceral drums here mark a return to the sound Brooks explored under his Elite Gymnastics moniker on the Ruin EP back in 2011. That EP also had two sides (on the vinyl edition) of the same songs with different arrangements, something Brooks returns to as an idea for the two-parted “Everything Can Stop Us Now” on Magical Realism 2014. The two tracks have some of the records best moments too – the first part exchanging sudden, cutting drum breaks with submerged textures, and the second part placing a hard-pitched vocal on top of a steely piano and ruffled beat that almost calls to mind 90s rap records like Reasonable Doubt.

The 2014 tag at the end of Default Genders’ album title places this record firmly within the right now, and as such that’s the world Brooks explores lyrically - with its mundanities, dramas and all. For a project so internet based (there are no plans for a physical or traditional release) it feels like an apt addendum and curiously makes this record feel like two completely polar objects; one, a piece of hyper-modern ephemera that could be recycled as quickly as a tumblr post. At the same time Brooks debut album also feels like a state of the world address like no other, one that creates a shelter and wants to be there for you in a time where the constant flicker of new media and ‘content’ could loosen even the firmest grasp of reality.