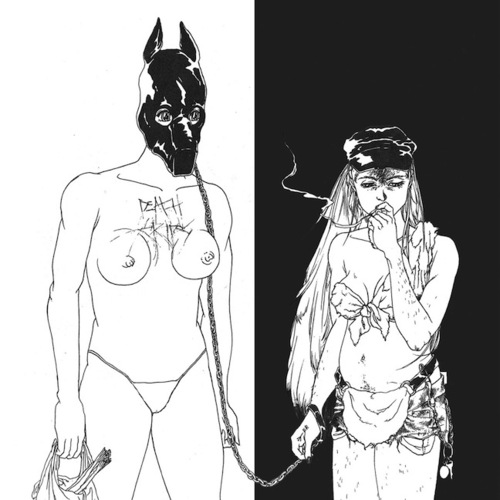 Some album releases are branded “eagerly anticipated” not because people actually care, but due to the name behind them. Adele’s next album will generate huge attention, as will Kasabian’s. It doesn’t mean they’re good. Others seduce our collective excitement through being exquisitely crafted, as First Aid Kit’s or NZCA/Lines’ 2012 albums were. There are a few records, however, which go beyond anticipation to become essential – no – legendary releases. We’re talking about the OK Computers, and Ziggy Stardusts out there. I think you already know where Death Grips’ The Money Store resides.

When the Sacramento trio of MC Ride, Zach Hill and Andy Morin dropped Exmilitary, arguably the album of 2011, it felt as though the ongoing electrap experiment has reached fruition. From Clawfinger to Atari Teenage Riot the fusion of aggression, modernity and the street had been paraded as a mere hypothesis; now we had the proof with the relentless ‘Beware’ and ‘Cut Throat’. Releasing it as a free download gifted the modern world its birthright and there was no excuse to avoid its mastery.

If Death Grips had stopped there then their infamy would be secured. Instead, they’ve continued to bravely attack the mainstream from the inside. Just as Bill Hicks started off as a cult hero, yet as he grew in popularity his bile increased in acidity, his scathing truths shifting cultural perceptions, The Money Store does the same and music is no longer the safe hipster-pop as before. It’s introducing a new order where rap, electro, rock, indeed all music, now sounds weak in comparison.

They may have signed to Sony, but their vitriolic agit-core remains strong. Indeed a major is needed to facilitate their aural magnitude – each track having its own gravity to attract buzzsaw beats and frenzied flames which collide to sandblast music’s foundations. There’s an urgency to the way its textured samples and apocalyptic synthesisers have been rendered, dumfounding the dogmatic illusion of crossover, to morph into something new. Whether it’s the armour-piercing oriental terror drone of ‘Bitch Please’ or the Salt ‘n’ Pepa-bastardising ‘I’ve Seen Footage’, The Money Store feels like being waterboarded into accepting a new status quo.

This transformative nature is most evident with ‘Hacker’, which takes raw filthy disco and stomping dance to germinate an end of the world rave. It spits quickfire squelches and terrifying sirens like a Korg with Tourette’s, yet the alchemic production throughout Deaths Grips’ masterpiece remains precise. Hill and Morin have created a dynamic multi-layered assault, which pitches D.A.F. in with Saul Williams and EL-P, reaching maturity in the pounding anglegrinder ‘System Blower’- a hybrid of Nine Inch Nails’ ‘Reptile’ and EL-P’s ‘Stepfather Factory’ slayed by The Locust. Then there are the throb-hall proclamations of ‘Punk Weight’ and ‘Fuck That’ which industrialise M.I.A.’s east with mescaline Scuds.

The Money Store is a tense and violently energising record which is relentlessly unforgiving – if anyone doesn’t get it then they’re left in the musical dark ages, such is its game-changing majesty. In case you haven’t realised, the world’s going to shit, so what do you want to do? Listen to a cutsie duo sing la-de-da, watch some boys cry over a guitar effect, or do you want to be empowered, invigorated, alive? There’s so much to get excited about with every space on the record filled with a revealing new sample, making it impossible to tire of.

This is probably the album of year, except Death Grips are releasing another this autumn – so whether it’s number one or two is still to be decided. Nevertheless it is pure unmatched artistry, so let’s just accept The Money Store as the pioneering sound we’ve been waiting for. After all they’re the ones who have seen the appropriate footage before inventing this, so who are we to be arguing?