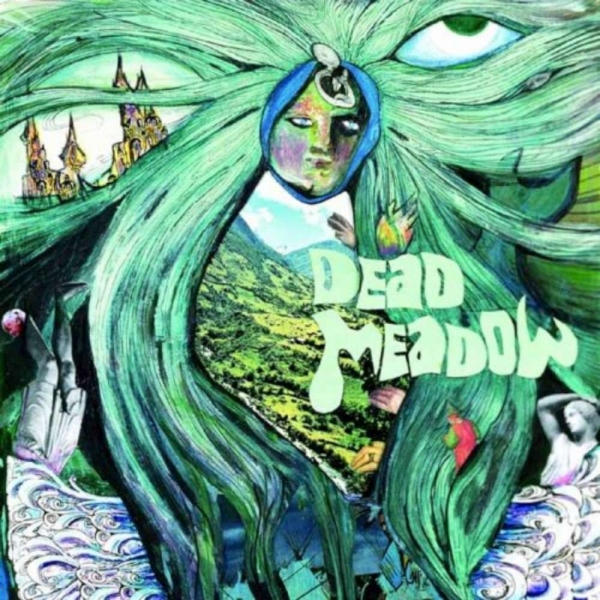 Did indie rock ever locate its mind after Black Francis lost his? Or did it just totally lose its shit in search of weirder, wilder sounds? Washington DC’s Dead Meadow are somewhat au fait with the concept of getting out of one’s head – they may not have invented the concept of mashing sludgy metal riffs with the whacked transcendence of psychedelia, but they sure as hell ragged the pair of ‘em mercilessly on a wild ride through texture, volume and some some of the most face-melting solos of the past fifteen years. As Xemu Records prepare to reissue the band’s self-titled debut, we’re afforded the perfect opportunity to reassess their early days.

The first and arguably best thing you’ll notice is that the album (originally released in 2000, kids!) has lost none of its rawness; nor, as the legions of experimental stoner rock bands out there would suggest, its relevance. The slow-spiraling intro of ‘Sleepy Silver Door’ splutters into a muscular shuffle recalling Kyuss and (inevitably) Black Sabbath, before Jason Simon’s helium-high moan kicks in, wailing hippy nonsense about being “washed up on the shore of reality”. It’s pastiche, of course, but playfully so – composed with a smile, a wink and a doff of the cap to what’s gone before them. Celebration with a sense of humour. This continues in much the same punishing vein for over seven minutes, until you can actually feel your cerebellum slowly breaking down into mulch. Next up, ‘Indian Bones’ begins life as a standard hard rock riff, before evolving into something approaching Deep Purple as reimagined by Neu!’s zoned-out kosmische (or maybe the other way around). Exciting? You betcha.

Simon’s brain-bending axework is quite obviously the main attraction, gazing at the stars even as it lacerates your skin. But the truly psychedelic element – the anchor that allows the guitar drone to explore other planets without cutting too far loose – is the astounding rhythm section of Steve Kille and Mark Laughlin. They know the element that really expands consciousness is repetition – the lock of the groove rather than the groove itself. And so they clamp their jaws round those grooves as tightly as they can, hammering and stomping away until your head nods involuntarily, your feet tap along of their own accord and your eyes close to pull you out of the room and into an innerspace, painted with Dead Meadow’s own colours. This is most ferociously explored in the stuttering sprawl of ‘Beyond The Fields We Know’, which at nine minutes is the album’s longest track, and also one of its most impressive. Perversely, it’s followed up by Dead Meadow’s one significant change of pace – the acoustic ballad ‘At The Edge Of The Wood’, which seems to have wandered in from Neil Young’s ‘Everyone Knows This Is Nowhere’ sessions, covered in dirt and blood, in search of shelter while a storm passes overhead. It’s magnificent, but no more so than the rest of this wonderful record. Hypnotic passages? Check. Kick-ass songs? Check. Heaviosity? Double check. If you’ve ever loved anything by Hookworms, Mugstar, Earth or any of the aforementioned acts, you need this record in your life. The band’s evolution never really took them much further than this point; the supposedly dead meadow was actually pretty darn fecund in the first place, and there’s a helluva lot to explore within that territory. Who needs their mind anyway? Turn on, tune in, bliss out.