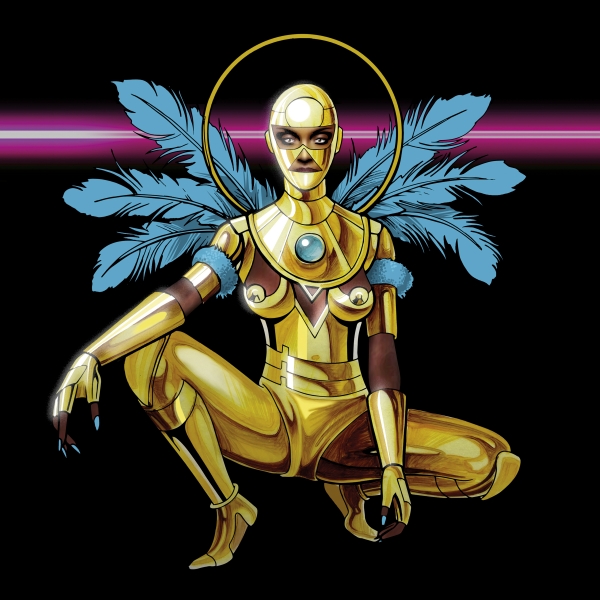 “Have you ever been to a second line?” Dawn Richard asks her mother at the start of her sixth studio album, itself aptly named after the New Orleans parade which celebrates music and joy in every scenario, be it a wedding or a funeral.

Her mother cackles in response as if surprised to receive the question; she grew up in New Orleans after all. But it’s revealed quickly that Richard's has posed this question to a different audience entirely. Second Line’s opener, “King Creole (Intro)” immediately whisks us into a storm, where thunderous drums and muttered incantations serve to guide us into a new world, led by King Creole herself, Richard’s alter ego. “It’s the second line, baby, so move ya feet,” she instructs. From here Second Line dances through the haven it begins joyously building; an Afrofuturistic vision of what could exist for Black women who want to live and love freely.

The communal elation found in a second line constitutes King Creole’s world order. Richard’s lyrics envelope a central “we,” grooving in the spaces between sensual lovers, wise elders, and sweet friendships. The accompanying music speaks for itself, filling every inch of Second Line’s constructed microcosm with the metallic hue of fuzzy synthesizers, reverberating chimes, and booming bass.

Richard’s voice floats through it all, shepherding newcomers with an intoxicating haze. Possessing the dynamism of a true leader, she deftly switches her singing from breathy and euphoric to strong and assured. On the dreamy, robotic track “Boomerang,” she acts as an alluring suitor: “Relax, enjoy the ride I’m giving you,” she sings in a breathless hiccup. Just a few seconds later, she’s reminding you that we all have larger roles to play, rapping pointedly: “I’m hot and you not / Let the beat knock / Let the body rock.”

Even at her most vulnerable and lovestruck, Richard recognizes the need to recontextualize love within the future she has built for it. Over the grooving funk of “Nostalgia,” she asks repeatedly in a stilted, robotic tone, “Do you love me anymore?” until her calls give way to rhythmic utters and moans. And on the soulful opus “Mornin | Streetlights,” Richard expresses her love with a simple utterance, “You gon' remember me in the mornin,” before transitioning to self reflection, wanting to just love for love’s sake: “Not enough of you are cravin / For the love of the light.” Within the joy and pain of personal relationships is a desire to translate her lessons outward, to give more than she receives for the good of her community.

Jubilant bounce track “Bussifame” also opens with Richard’s mother defining a second line in her own terms: “Everybody is happy and they’re doing how they feel,” she notes carefully, before her words dissipate into King Creole’s musical future of Black Southern jubilation. This is the core of Richard’s message, and it's felt deeply throughout her record as we explore the sacredness of her space and the comfort of her language. “You’ll get the chance to move your feet,” Richard's shouts in a resounding echo. We all deserve that chance to dance as freely as the women in her music, as the community in her second line.