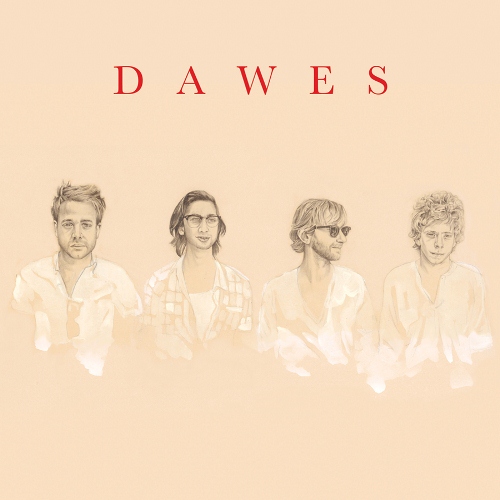 As with many imports, this second release from Los Angeles Americana four-piece Dawes is actually a prequel album. Originally released Stateside in 2009 on ATO Records, the critical acclaim their breakthrough Nothing is Wrong (2011) has garnered a desire for more, and thus North Hills finally gets its European release via Loose Music.

With a sound so evocative of their Laurel Canyon predecessors, and with a title, too, that nods to the inspiring views of the North Hills of San Fernando valley it’s no surprise that a 2″ analog recording was the band’s favoured method of documentation. The album itself, especially in its opening two tracks, exudes a rawness at its core and a frayed edge of authenticity in its production, so much so that it is often hard to believe this was recorded only three years ago, and even more so that the musicians who have made it have an average age of a mere 20 years. It’s a dusty sound inspired more by the expanse of the American landscape sprawling around them than the crystalline modernity of LA and this is never more apparent than in opener ‘That Western Skyline’; unobtrusive drums, whirling organ and delicate guitar all providing a humble accompaniment for frontman and wordsmith Taylor Goldsmith, narrating with compassionate vocals.

The shuffling instrumentation and vocal prowess continues throughout much of the quieter numbers, while four-part harmonies on the stripped back ‘Give Me Time’ offers a rootsier side akin to the bluegrass of Old Crow Medicine Show and succeeds just as easily as the tracks from the other end of the spectrum, like the stomping rhythm of ‘My Girl to Me’. For those who have heard their Jonathan Wilson produced and Jackson Browne featuring sophomore release, North Hills will be as easily digested and perhaps more soul baring as one would hope.

Goldsmith’s lyricisms evoke a world weary old soul coupled with the musical curiosity and dynamism of the quartet’s youth. Their playing is it one moment restrained in lo-fi campfire folk, ruminating on love, life, death, and then at other times excels in surging anthemic tones, like on the rousing ‘When My Time Comes’. This band expertly couple ambition with precision, having near-flawlessly composed this contemplative recording. No wonder Springsteen is singing their praises… and I guess no surprise either.