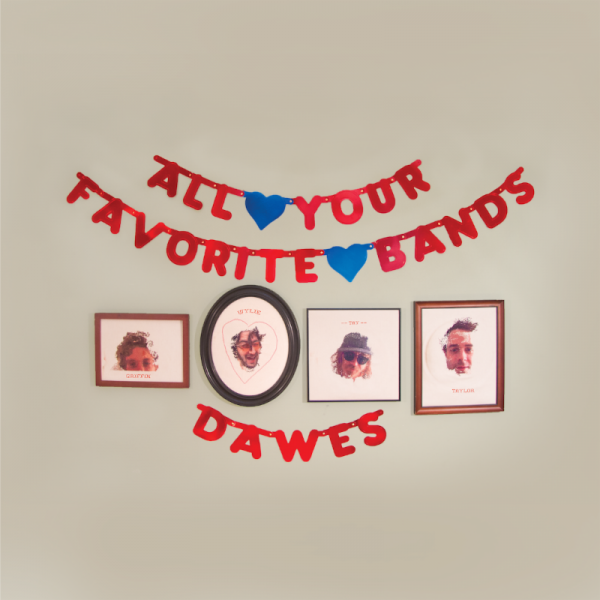 If you saw Conor Oberst play live last year, then you’ll already be acquainted with Dawes. The Bright Eyes man spent most of 2014 on the road in support of his latest solo record, Upside Down Mountain, and the Los Angeles four-piece - with brothers Taylor and Griffin Goldsmith at their core - served as both opening act and backing band. They certainly did a fine job of the latter assignment; they were polished, tight, and added some lovely flourishes to Oberst’s enviable back catalogue, too; I seem to recall Taylor bringing a gorgeous guitar solo to the table on “Lua”.

It’s also worth noting, though, that Oberst played a lot of tracks off of Upside Down Mountain at those shows, and it can’t have been a coincidence that Dawes were drafted in to back him up in that respect; after all, for all its strengths, that album was the safest Oberst had made in at least a decade, harking back pretty heavily to his biggest commercial - and arguably, critical - success to date, 2005’s I’m Wide Awake, It’s Morning. There is little about this fourth Dawes full-length, All Your Favorite Bands, to suggest that they’d have been in the frame to play with Oberst if Upside Down Mountain had been in any way experimental.

That’s because, put bluntly, this record is so middle-of-the-road it hurts. The songwriting is formulaic, the lyrics largely uninspiring and while the fact that it doesn’t really seem to lean too heavily on any one style might have been a virtue, it actually only adds to the unremarkable nature of the tracks. There’s enough little touches - the slide guitar on the title track, the stacked vocals on “To Be Completely Honest” - to just about qualify it for the folk rock category, but otherwise, All Your Favourite Bands is sorely lacking in personality.

Thematically, Dawes are in the business of wistful love songs flecked with references to classic Americana that are largely plucked straight from heartland rock - nods to “your brother’s El Camino” or “late-night drives and hot french fries” are standard procedure - but wit and charm are conspicuous by their absence. Taylor’s guitar playing is the record’s real strength - he can write and reel off a mean plucked solo - but as the record wears on, he opens himself up to accusations of being of a one-trick pony. His vocals, meanwhile, are pretty vanilla; a touch of country to them, perhaps, but ultimately they’re too plain, too clean, and too refined to really contribute anything to the overall identity of All Your Favorite Bands.

The folk rock scene that Dawes hail from, and that likely led to their introduction to Oberst, isn’t exactly going through a fallow period, so if you’re going to make a record that’s played as unremittingly straight as this one, you’re going to need something that sets you apart from the crowd: a genuinely sharp ear for melody, an incisive lyrical approach, or an understanding of how to glean new life from old instruments, for instance. There’s not much evidence to suggest that Dawes have any of these, though, and they sound as if they’ve run out ideas long before they reach the unnecessarily prolonged, nine-minute (!) closer “Now That It’s Too Late, Maria”. All Your Favorite Bands is plenty polished, but scratch the surface and there’s close to zero going on beneath it; it’s the kind of record that you’re in danger of forgetting before it’s even finished playing.