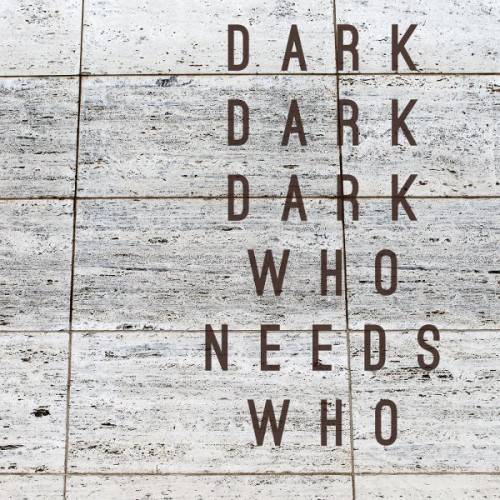 With their third release avant garde Minnesotan five piece Dark Dark Dark return with a collection of beguilingly beautiful compositions sprawling the boundaries of blues and jazz, Americana and folk.

Steeped in personal experience, vocalist and composer Nona Marie Invie is not one to shy away from self expression – indeed the band’s preceding album Wild Go stripped bare, quite literally, the band’s three core members for its album cover – and Who Needs Who picks up where this vision of unclothed emotion left off. With the majority of its material penned by Invie in Minneapolis (and later arranged by the band), the ten tracks catalogue the breakdown of a relationship, in this instance her break up with band member Marshall La Count. It’s a reflective looking back in which she distances herself enough from the vocal narrative that it becomes an omniscient and objective surmising of loss rather than an indulgent over-analysis of the self. Speaking on the topic she has said that “many of the songs are about understanding and accepting the nuances of my emotions. The obvious parts and the dark parts. The times when it’s important to quit fantasizing and face the truth about what is happening.”

As such, the music mirrors the downbeat topics at hand, with ballads of loss and longing glittering in the maudlin minor blues and blacks of the 45 minute play out. For the most part these are piano-led contemplations which are given body by Invie’s stirring and piqued vocal; to which it is easy to draw comparisons to Regina Spektor. The staccato piano of ‘Last Time I Saw Joe’ offers a contrast with its predecessor, the slightly more buoyant and reminiscently joyful ‘Tell Me’, while the double bass treads of the waltzing ‘Without You’ are sewn with accordion interludes. There’s a desire to move forward throughout, and the utterances of “I must go on” in ‘Patsy Cline’, laced with violin, the thick notes of a double bass and plaintive male/female harmonies, compound subsequent references to bodies of water in their continued journey confusedly onwards: “I lose what is good to the sea/I am a river wandering aimlessly”.

Recognisable for their flourishes of world music influence and infectious vocal, Dark Dark Dark remain a band challenging their own sonic capacity. Perhaps not quite so lively as Wild Go, Who Needs Who continues to offer stories of longing, passion and portent in a more tempered and subtle style of experimentation, and it is often all the more sophisticated and successful for this.

Listen to Who Needs Who