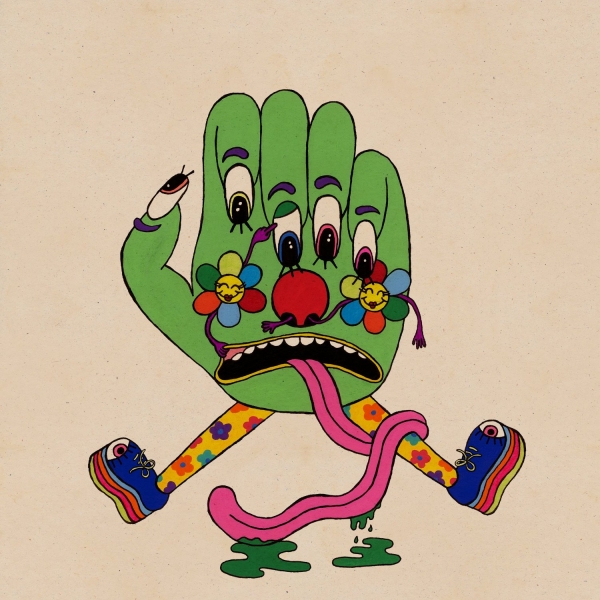 Baltimore resident Dan Deacon may well be most renowned for his live performance parties and childlike enthusiasm for audience participation, but, leaving his work as a next level fun-engineer aside he’s also a rare, modern renaissance dude. Sine wave experimentation, video collage, modern classical composition and film scoring are all part of Deacon’s coat of many colours; he also releases expansive, euphoric electronic albums such as 2012’s glorious America; an exploration of Deacon’s mixed emotions and opinions towards the country that spawned him.

This time around intentions are perhaps not quite so overarching, Deacon creating the whole of Gliss Riffer as an entirely solo project and largely confining himself to the structural tropes of modern pop. Where vocal parts have often been little more than bricks in the wall of Deacon’s constructions, here they become focal points, a hook upon which the listener can latch and be carried across the vivid, lysergic rushes of tapestry electronic.

This is a record that shrugs off some of the grandiosity of America and instead offers more detail and smaller, more nuanced yet easily interpreted emotions within a relatively familiar context. Yet this doesn’t make it a safe or bland record by any means.

On “Sheathed Wings”, a jittering, skipping freakout that wants to get “A little bit closer, a little bit” we get not only a choral sweep to give shivers but a jarring punk rock push that is as unexpected as it is enthralling. Deacon uses genre restriction as an opportunity to fill every corner, every pocket of air with beats, glitches, rainbows of uplift.

“Meme Generator” offers a bold sweep of human colour to counteract its android mechanics – a heartbeat buzz to combat the clipped, cut ‘n past glossolalia that may or may not be describing “every step” as the beat goes on.

Deacon has mastered the human connection that is achievable on a base level when tinkering with alien, replicant sounds but dealing in personal emotion. Like the disembodied voice of HAL in 2001, sounds of the robotic, further those tangentially linked to space, have a unique appeal to the human ear, triggering all kinds of untapped inklings, ideas and feelings. Like metal on skin, this is in essence the intrinsic appeal of electronic music in the simplest terms and Deacon harnesses this to some great effect.

“Learning to Relax”, with its automaton choir, touches deeper and reaches further in than most “organic” guitar music could hope to achieve. This is the kind of dance music that makes you move while moving you. A sweet breakdown and a rebuild into the apt refrain “Just take me out of my mind” offers a further example of sound layered on sound, contrasting intimation with inference, style and substance collapsing beautifully into one another.

An interesting aside, the fact that much of this material was written while on tour with Arcade Fire last year (which made for some genuinely thrilling shows) really does shine through – particularly on “Mind On Fire”, which has all the hallmarks of Win Butler’s crew at their most danceable and colourful, yet as the voice squalls “I’m still alive” you can’t help but feel it’s actually offering a touch more soul than they managed on Reflektor.

The closing pair of tracks on Gliss Riffer (a funny, self-aware title that’s based on Deacons love of glissando – the slide along a series of notes from one pitch to another that often has that hairs-on-the-back-of-the-neck effect) are atypical of the set, a look back at the expansive stylings of Bromst and America.

Closer “Steely Blues” in particular gives the feeling that you’ve been taking on a gleeful, communal journey. The long last note fades as the listener grins and somewhat inevitably reaches for the ‘play’ button once more.

Deacon’s latest incarnation as a pop wizard with a thousand styles and tricks up his, er, sleeve isn’t actually the vast transformation it could have been – more a transition or shift into a slightly different realm, a realm Deacon explores and shares with his listeners whilst invoking otherworldly joy and presenting a clutch of electro-psych that defies darkness to offer endless rays of glowing, strangely spiritual light. Let him be known for that, and let us rejoice.