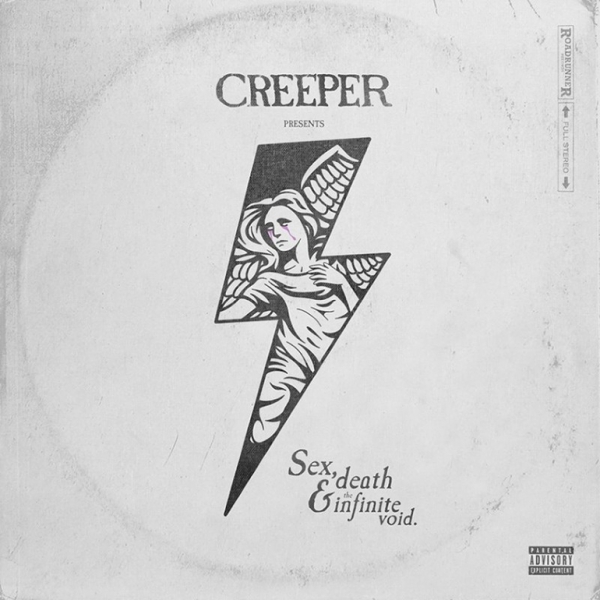 Creeper have always been a band with a penchant for dramatics.

So much so that in late 2018, they faked their own death. Standing on stage, in front of a room of devoted fans, frontman Will Gould announced that “not only is it the last show of this album, but it’s the last show that we’ll ever do”. And nobody heard from them for a full year.

Sex, Death & The Infinite Void is the product of the band’s reincarnation. Naturally, it is different to Creeper’s debut album, Eternity, In Your Arms – less punk rock, more rock n roll, and the themes of growing up are replaced with musings on being an adult and navigating a new, ugly world. But of course, one thing remains the same – the theatrics are as present as ever.

Dressed in a dramatic story of toxic, obsessive love, the album begins with "Be My End". It’s filled with classic Creeper lyrics like “I don’t wanna die tonight at the hand of anybody else but you” – reminiscent of the chorus to 2017’s "Suzanne". It’s heavier than the latter, Gould darting between screams, guttural whines, and a vocal that harks back to that of Gerard Way’s on The Black Parade.

The band’s influences are certainly evident throughout the album. "Born Cold" sounds like HIM, though with a slight pop-punk tinge to the chorus as Gould almost whines “do I look so good that you wanna treat me bad?” ‘Thorns of Love’ immediately feels like an old Gaslight Anthem track, and "Napalm Girls" – along with much of the record – has Alkaline Trio written all over it. This is no bad thing – Gould’s delivery of each line is fantastic, and the lyrics are lofty in multiple different ways. It’s exciting and feels fresh set against the current scene, but it feels just a little too all over the place.

That being said, where this record really shines is in the moments when some of the glitz is stripped back. "Four Years Ago" brings in Hannah Greenwood’s vocals, vulnerable, mournful but with her own kind of power as she sings of a past, all-consuming but untrue love. Much like Eternity’s "Crickets", it brings the band down to earth and levels them with listeners.

The laid-bare honesty of such songs is something Creeper do very beautifully, as the closing track "All My Friends" reiterates. It’s the lyrical highlight of the record, and one destined to inspire the most moving moments at live shows – much like fan favourite, "Misery". Gould explains that rather than being “woven from dreams of fantasy” as with much of the previous record, this song “was written about a very sobering reality”. It’s filled with poignant words but ends with the simple line that “all my friends hurt”, the album’s final note that adulthood – and navigating everything that comes with it – is rough for everyone. It’s a sincere reminder to look out for each other, and to tell the people in your life you love them. They probably need to hear it.