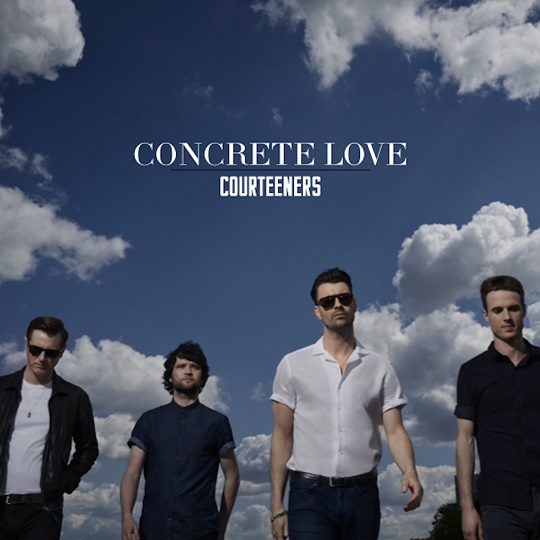 Courteeners lost some baggage in the shape of their ‘The’ last year with the release of “Anna”; a sign of their age perhaps? Maturity? Weight loss? It normally suggests a change in direction, but from where I’m sitting Courteeners remain (apart from Liam’s haircut) the same; a fixed mantelpiece trinket in the halls of indie.

Not necessarily a bad thing; the band have a stamp, a trademark, a ‘sound’ which they are glued to. Liam Fray has a penchant for floating love songs and disgruntled Mancunian ballads, and it does work - but isn’t getting a little samey? Following on from the album taster How Good It Was EP, the outfit have revealed their fourth long player Concrete Love. Is there anything new here? Absolutely not.

Indie music has warped, stretched and expanded exponentially in its life time, becoming more a tag line to suggest something slightly left of centre rather than a style in its own right. However, Courteeners, who may have changed their image from Fred Perry to leather jackets and denim, have kept their sound more or less the same – the Gallagher mop and football ragamuffin venire has faded, but the wallowing and Fray’s knack for writing good, but rather predictable songs is set in stone.

That aforementioned prequel EP was a nicely packaged, sweet sounding and at times captivating release - unfortunately though, its buzz is thinned across the remaining tracks of the full length. At times it provides guitar driven indie with flecks of electronics in a family friendly, advertisement ready package, somewhere between White Lies and the lighter shade of The Enemy, and at others tries to tentatively dip into wider pools of urban influence, quickly returning to the safety of the beach and sunblock. It remains endlessly listenable, but not one for the history books.

The EP’s title track “How Cool It Was” enlists floating strings, driving rhythms and a nostalgic look at childhood love; a permeating message that becomes more obvious with every syllable Fray utters throughout the record. It’s an epic, big sounding indie pop song ready for stadiums, but again lacks any sort of depth.

“Summer” bounces along in a warm pastel glow, flecked in mosquito bites and fake tan, and “Dreamers” winds down the album in disappointingly mediocre fashion, lyrically lacklustre and devoid of any real emotion. The whole track, and album for that matter, falls to its lowest state as the painful line: “Cocker-Spanial lay spark out tired from chasing his owner whilst he’s chasing his dreams” is mumbled. The averageness and emptiness of that lyric rings out across the entirety of the song’s very long five minutes.

Although Courteeners have got a knack for writing catchy, radio friendly indie-pop, one wonders whether that alone cuts the mustard any more. This particular realm of music expands, and you need to expand with it, or remain interesting enough to survive as you are; Courteeners have unfortunately done neither.