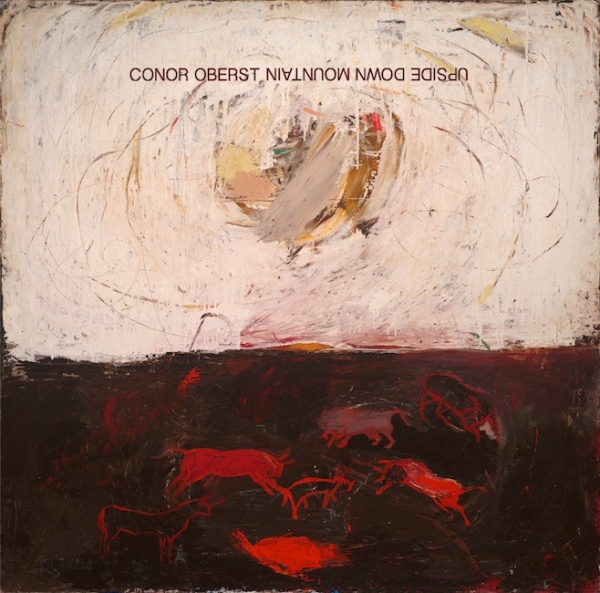 If Conor Oberst continues to release albums like Upside Down Mountain, then sooner or later he’s going to start getting talked about as being one amongst the greats. Because what the ex-Bright Eyes man does on his umpteenth record is re-affirm his often ambivalent personality, one which has come of age over his illustrious 20 year long career.

That personality may not be one which is easily warmed to. The Nebraskan singer-songwriter has paraded his brand of angsty poetry to us with varying degrees of sentimentality and self-indulgence throughout his two decades of activity, be it under his primary Bright Eyes moniker or with his various side-projects. Nonetheless, it has always been a compelling journey and it is one that seems appropriate to his era. Just as Bob Dylan stood for the activism of his time and place and Tom Waits the grotesque, Oberst has come to stand for the catharsis of emotion in an age where having a little moan and a whine is the pastime of many a social media user and online blogger.

Just as much as we like to scorn and scoff at the public emotions of others, we also find ourselves easily drawn in to the drama, which is what has happened with Conor Oberst (and at least he does his moaning to nice tunes). This said, Oberst’s song-writing has matured a lot from the days of the anxiously angry Bright Eyes’ turns such as Letting Off The Happiness, or Fevers and Mirrors. The singer-songwriter’s motives have become much more concealed and his endeavours much more poetically measured. Put simply, the song-writing has grown-up. After all Oberst is a 35 year old man now.

On Upside Down Mountain, Oberst mingles with notions of loneliness and heartbreak as he has done time and time before, but this time all sentimentalities are sung with a sense of earnest that was erstwhile lacking. On opening track “Time Forgot”, the singer waxes about getting good and lost and forgotten, claiming that “I’m not all there until I finally leave, some loneliness is acceptable”, and he later professes on leading single “Hundreds of Ways” that “sometimes I get mistaken for this actor, maybe no one really seems to be the person that they mean to be, I hope I am forgotten when I die.” These aren’t the sensational cries of a teenage poet any more, but instead the contemplations of a bloke who is getting on a bit, edging closer to the big four-oh, and attempting an (albeit miserable) evaluation of his life and career so far.

There is a lot of ‘man-staring-into-nature-thinking-about-how-rubbish-fame-and-fortune-is’ going on during Upside Down Mountain, something which comes through on the slow burners “Lonely At The Top” and “Night At Lake Unknown”. These are just a few of the many quieter tracks on the album, but all are skilfully underlined by impressively sparse musical composition, such as the bluesy weeping steel guitar of “Double Life”, or the achingly soft tremolo picking of “Artefact #1”.

The craft behind Upside Down Mountain is undoubtedly one of Conor Oberts most experimental musical realisations, yet as he embraces traditional country and western motifs and blends them with his own inimitable folk-pop stylings and a few other tidbits from the musical spectrum. “Hundreds of Ways” begins with a honky-tonk energy that transforms into something quite exotic with a tropicana bass-line and triumphant brass section. “Zigzagging Toward The Light” is innocuous enough until a power-chord crescendo comes in and introduces a momentary sleazy guitar solo, an aesthetic later repeated on “Kick”.

Whether he likes it or not, and come fame or fortune, Conor Oberst has affirmed that he is in the business for the long haul. After 20 years of song-writing he still manages to capture his audience’s attention with his pains and complaints, and he has proven that his musical knack is far from becoming stagnant. Whereas many of Oberst’s previous offerings sounded like the makings of an awkward adolescent who was handy with a guitar and a fourtrack recorder, Upside Down Mountain establishes the songwriter as a career-musician, one who probably won’t be forgotten for a while yet. Soz Conor.