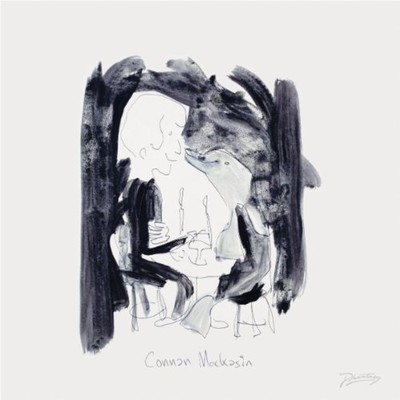 Forever Dolphin Love is the first album from Connan Mockasin, although his name has been heard in musical circles for a little while now. Originally hailing from Wellington, New Zealand, he made his way over to the UK in 2007 where he has settled in London, after spending some of his time in Sussex. Returning to the motherland, Mockasin embarked upon the recording of this, his magnificent debut Forever Dolphin Love – an album full of colour, vigour and serene, haunting tones.

Opening tack, ‘Megumi The Milkyway Above’ introduces us to our musical host and very much sets the tone for the sounds to be delivered throughout the rest of the record. A chorus of children’s voices heartily chant the words “Hello Connan” before the song delves into beautifully off kilter guitar parts, ravelled around gently yelping vocals. From this moment on, the album is engaging and consistenly captivating. In a recent interview, Mockasin stated that rather than recording individual songs and then fitting them around each other to create a track-listing, that the album (although completed over numerous sessions) was recorded in the order in which it is heard. This accounts for the various instances of stark, engrossing experimentation comprising the intros and outros of the songs, aiding each track to filter pristinely into the next. The whole experience feels synesthetic; sounds conjure colours, which in turn, inspire rich images -an all-consuming, psychedelic experience.

Mockasin’s main guitar sound is gentle, atmospheric and consistent throughout the album, helping to enhance the feeling of fluidity. Second track ‘It’s Choade My Dear’ is a sumptuous mix of such trickling guitar parts and Mockasin’s ethereal, delicately infantile vocals. It’s a sound echoed in the title track,’ Forever Dolphin Love’ which opens with a three minute rhythmic adventure before the progression eventually settles around sauntering guitar melodies, which at times are akin to jazz creations, at others, the brilliantly intuitive telecaster sound of Jeff Buckley. This is a song of progressions – various tones and movements emerge throughout the 10 minute journey to create a song that’s full of longing – perfectly natural and incredibly beautiful.

The songs on Forever Dolphin Love conjure images of desolate fairgrounds, an abandoned children’s ride rocking gently in a breeze. Here, we find the wide-eyed exhiliration of youth channeled through carefully structured, captivating melodies. There’s a nostalgic feel to the music, glancing back at the hazy warmth, and innocent bewilderment of children. Mockasin demonstrates a pure understanding of this fantastical feeling that most fully grown adults have long forgotten, a feeling which he masterfully recreates here, carefully preserving it by wrapping it in his soft, sublime songs.

Forever Dolphin Love is an album which needs to be listened to over and over again. There are so many elements, so many thoughts and so many directions on this record that a single spin would not suffice. It’s mesmerising, addictive and comforting, littered with playful lyrics and serene melodies. This is a gorgeous record, as inspired as it is inspiring. A remarkable debut.