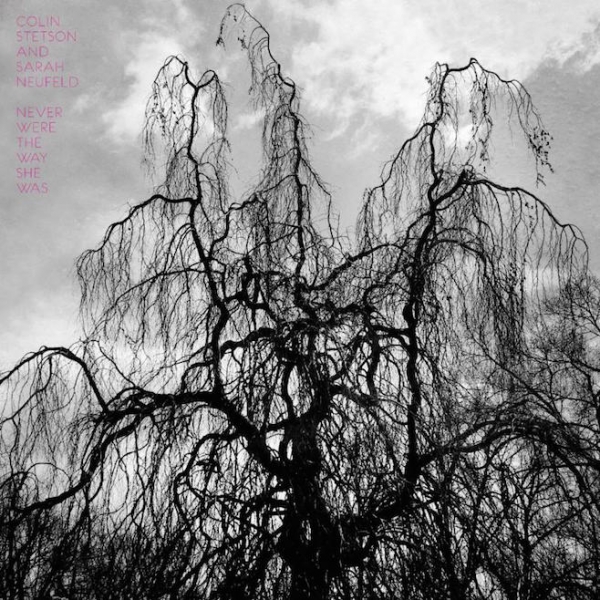 There’s a single moment, an elemental noise, which defines and captures the nature of Colin Stetson’s music. It comes not on one of the saxophonist’s great trilogy of albums under the title New History Warfare but in an explosive guest appearance: on the opening track of AU’s Both Lights the breakneck introduction suddenly falls away, and Stetson’s sax bursts in sounding like the major chords of a piano, the brassiest of bass notes, the grubbiest of guitar riffs, and his fingers pressing on the keys of his instrument added a thud of explosive percussion.

That’s the brute force earthy side of Stetson; but here on Never were the way she was, joining once again with violinist and fellow Arcade Fire collaborator (and permanent member) Sarah Neufeld he pulls back just a little on this aspect of his music in order to share equal billing with Neufeld and her strings. The two Canadians have worked together on record before, making the notably creepy soundtrack to the Beltway sniper film Blue Caprice and on this record the unsettling nature and feel continues, enhanced by the fact the pair recorded in the confines of a Vermont farmhouse attic.

The attic can’t hold the music of Never were the way she was; the freeing sweep of Neufeld’s violin has already been heard on her 2013 solo effort Hero Brother, and here, when they are on their own, Neufeld’s notes swoop and dive in their look for a way out of this tight space before clashing with Stetson’s horns. When this happens, it creates the best moments on the record but it’s not an immediate pay-off for the listener. Opening with the hazy morning rise of “The sun roars into view”, Neufeld punctuates the track with stabs of violin, surprisingly urgent against the early-day feel of the track, while Stetson’s horns gently flutter – and occasionally abrasively squawking - into the spaces between the notes before they come together as a storm darkening the morning bliss. There’s almost a sound of rain on a tin roof at points, frantic and pacy, and then it’s gone again like clouds bursting and dissipating.

While a track like “In the vespers” suggests a soundtrack to the chaotic, non-stop nature of the big city, things are a little more sedate in their movement elsewhere on Never were the way she was. “And still they move” has Neufeld’s violin sadly scraping over barely-there horns from Stetson, its slow passage conjuring up images of time-lapse decay and as the track segues into the gloomy and portentous “With the dark hug of time” – Stetson’s keys providing a rare clunk of percussion on the record, the other being the dark “The rest of us” whose beats sound positively electronic – there’s a feeling that something is rising out of the darkness, battling against wind and rain and floods to assert itself on the landscape. The music has escaped the attic and is feeding off the land, the horns weighting down the attempts of the strings to cast off into the air and twisting into one sad, slightly grotesque, whole. The sadness reaches an apex on the title track, where mournful strings meet snoring sax in a barren landscape carved out of the horns and violin, becoming one instrument which has buffeted the surfaces of this place in search of a home, blowing hot and cold – but always with intense power.

Never were the way she was is serious music; two musicians showing what they can achieve, how far they can go with what lies in their hands and nothing else. Colin Stetson and Sarah Neufeld don’t make it easy for the listener on this minimal record, but what they create here demands your attention.