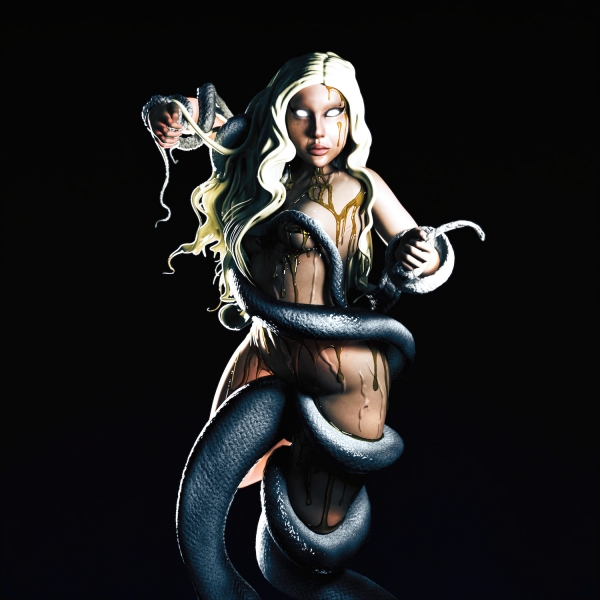 If Cyber-BDSM was a music genre, COBRAH would be its architect. Doubling down on an already latex-clad discography of dancefloor anthems, this self-titled EP is dripping with dark electro sound and slick earworm production.

As a staple of Stockholm’s fetish scene and the lesbian genius behind cyberpunk queer stompers such as “WET” and “U KNOW ME”, COBRAH’s second EP COBRAH is unsurprisingly a love letter to queer women with an electro-pop house stamp to match.

Opening singles “DIP N DRIP” and “GOOD PUSS” bring the hyperactivity and lyrical eroticism that are now crucial to any COBRAH track. Punchy vocals and production to match, “DIP N DRIP” is a standout on the EP, likely to be found blasting over a high-octane motorcycle chase, while “GOOD PUSS” plays out with all the bubbling electronic production and anthemic voice of a SOPHIE single.

Two tracks yet to be released as singles; the unapologetically lewd “GOOEY FLUID GIRLS” and “BANG”, an amped-up house track, are very lyrically heavy with COBRAH almost tripping over her vocals in the latter song from the sheer speed of her delivery. Lacking the darkness of the previous tracks, it’s understandable why these two were not released as the first glimpses but still remain pivotal to COBRAH's deft palette.

Despite this, the sickly sweet vocals over “DEBUT”, which could be considered the closest thing to a love song from COBRAH are one of the most exciting elements of the entire EP. Pitched up and paired with a reference to one of her idols, Kate Bush, COBRAH’s seduction of her lover plays out via vocoder: “You wanna feel nice / Let your hair down / You wanna see clouds / Wuthering Heights”. The pulsating bass and alternating between claps and clicks ends the EP with a romantically subversive track that entices listeners with an allure no different to that of COBRAH herself.