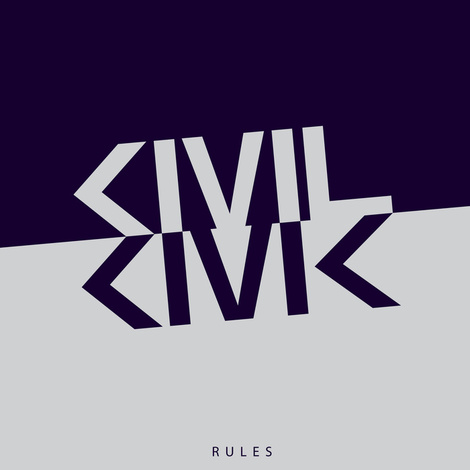 Frontmen; notorious egocentrics, spotlight-hogs and erratic divas – who needs ‘em? Apparently not Antipodean noiseniks Civil Civic, who, rather than opting for some limelight-stealing catalogue model reject, have employed a robot as their particular mainstay. Monickered ‘The Box’, the bands ego-free, mechanoid light operator-cum-drum machine accounts for a third of the band’s headcount. Despite the absence of a leading man, not since the heyday of Death From Above 1979 have two people (and, yes, a robot) managed to make as glorious and irrepressible a racket as Civil Civic do on their debut album, Rules.

There isn’t a moment on Rules that suffers for those absent vocals either; the violent squeal of ‘Less Unless’, the gritty melodies of ‘Run Overdrive’ and the lumbering bass of ‘It’s Krill’ all make for more than sufficient centrepieces. The instrumentation has enough hooks without throwing a set of pipes into the milieu, where, presumably, they would simply sink beneath the thick, squealing layers of feedback and gritty basslines that make for Civil Civic’s lifeblood. Yet when you’re creating a collage of noise that specialises chiefly in nausea-inducing feedback washes and squealing guitar melodies, you’ve got to be careful not to obscure yourself in your own clamourous fog. Thankfully Civil Civic punctuate any descent into the bleary abyss with a return to gut-wrenching riffery and, most importantly, a sense of sheer, unabashed fun.

It’s incorrigably energetic, irrepressibly colourful fare; a self-assured guitar-riot in need of fist-sized hit of Ritalin, but that’s about all there is on offer. Rules is, for the most part, a one-trick pony, but Civil Civic have thankfully got their grit-schtick down sufficiently to keep your heart palpatating and your focus fixed. The energy that both duo and robot pour into the likes of ‘Street Trap’ and ‘Airspray’ is the sort of enthusiasm that wins both dedication and acclaim. Yet in the wake of Rules one persistent afterthought lingers – it’s gloriously adrenal, but little else; and for Civil Civic to keep that chemical enthusiasm alive beyond Rules, they’re going to have to adhere to one very simple rule indeed – evolve or die.