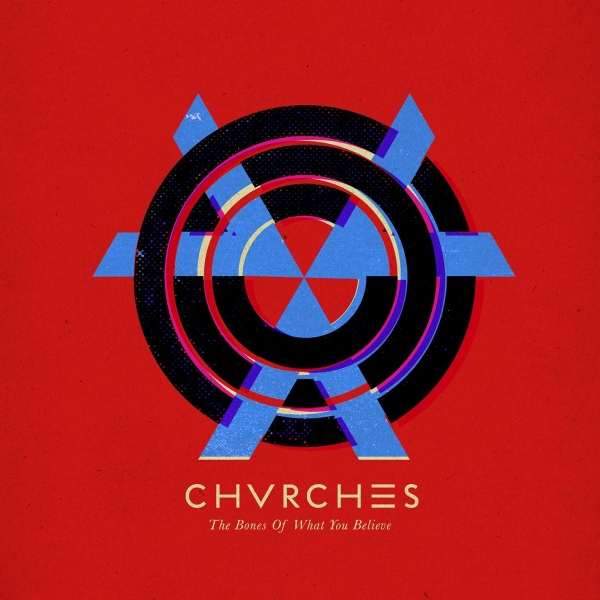 There’s a scant spray of acts this year that have even come close to how big a deal chvrches are. In recent memory, it’s difficult to conjure up a synthpop outfit that have ignited such a palpable buzz; every track drop, each tentative dangle, every announcement, no matter how slight, has invited a cornucopia of frantic squealing and hypesteria – and it’s not without reason. They’ve contaminated the pop coterie and in doing so, claimed a number of awards or nominations (including coming fifth on the BBC Sound Of 2013 list). Without further ado, they launch their debut LP, The Bones Of What You Believe.

The Glaswegian threesome of Iain Cook, Lauren Mayberry and Martin Doherty have been the electro-merchants du jour for a just over a year, since the release of single ‘The Mother We Share’ a little over 365 days ago. The cut dribbles with E-number hooks. The synths clash and shatter like glass, backed by base rhythms – while it sounds like ear-sugar, it’s more along the lines of an expression of strength in the face of familial struggles. Much of their appeal comes from the juxtaposition of Mayberry’s honeycomb croon, slathered over myriad synth bursts and dance-pop beats; though the trio may appear candied, there’s a substantial bite to be aware of. This isn’t bubblegum pop.

‘Lies’ grinds and jitters. The goliath earworms are tremendous, instantly burying themselves deep into the folds of your mind. Mayberry’s childlike croon echoes out over the stuttery old-cyborg squawk; it feels darker, perhaps more adult. ‘Recover’ wrings out an avalanche of overcast despair: “And you take what you need/ and you don’t need me.” What we hear is the demolition charges detonating on a failed relationship; Mayberry proffers rhetorical questions in a vain attempt to turn back the clock. ‘Gun’ shimmers and glimmers and does all kinds of things that end in ‘-immer’. The shots of ’80s new wave synths echo into the ether. Again, it’s a big chorus, big hook number. The issue here is that on a 12-track album, we’re familiar with a third. Maybe it’s a symptom of the industry in its current state, but there’s a small part of you that feels gypped at the fact that you’ve already heard a hefty slice of this LP.

Fresher efforts are dazzling though. ‘Tether’ is an anthem for when the DJ has gone to his hotel room, the janitors start mopping and you’re left sobbing into your palms in a puke-lined cubicle. The synths warp like pizza dough; it spins and stretches – guitars ripple in the shadows, and Mayberry’s vocals sound almost slowed down. ‘Lungs’ pumps with chemical energy like an oil derrick piston. There’s a keyboard klaxon, fractured melodies and the golden vox feature vocoder harmonies – it’s like a duet with Kanye West on helium. ‘Science/Visions’ ricochets, staccato motifs rattling ad finitum against the soft throb of kick drum. There’s a vital pace, despite the cosmic riffs on offer.

The strongest moments on the record, not to belittle the stellar pipes of Mayberry, are when the timbre shifts and we get Cook and Doherty helming the vocal duties, as on ‘Under The Tide’ or ‘You Caught The Light’. There’s a possibility that’s it’s impressive just due to the fact we’re hearing something different – it is nice to listen to a deeper register though, as often the combination of high-pitches is fatiguing, even migraine-inducing (even then it’s difficult to turn the album off, and it becomes a real dilemma to whether you want to keep listening or alleviate the agony).

Aside from a few minor problems with the EQ, The Bones Of What You Believe is excellent, as we all knew it would be. Many of the tracks available here could be chart-bothering Top Ten flirters, and Chvrches gutsy, crucial sonic smoothie never ceases to be utterly charming. They concurrently force you into a quivering wreck of tears, an ecstatic delirium, a lovestruck flutter and a warpath of foot-stompin’, fist-pumpin’, hip-wigglin’, lipstick stained, vodka scented glorious hedonism. A soundtrack for life’s glorious heights and crumbling nadirs.