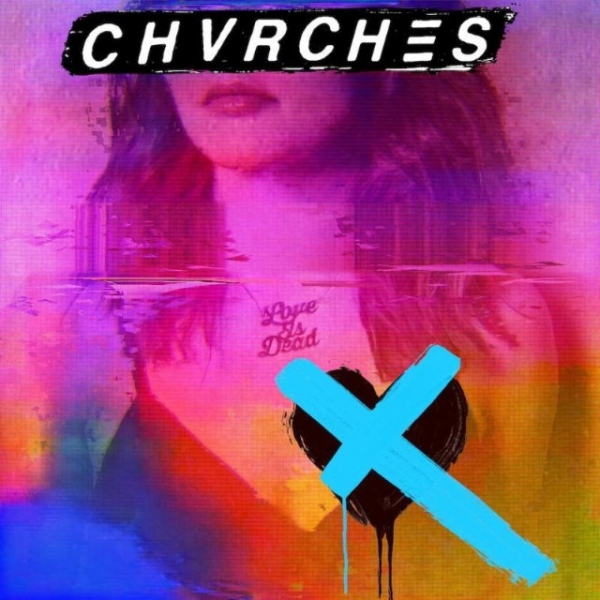 By the time they finished touring Every Open Eye, Chvrches had the world at their feet.

They’d succeeded where so many British bands have failed; gaining as equal a foothold in the American market as back home. They’d been playing the biggest festival slots of their career. The positive critical consensus was solid: that they’d been able to take the penchant for anthemic miserabilism shared by so many of their Glasgow peers and turn it on its head, applying a much more colourful instrumental palette to make something that, sonically at least, was bright and beautiful rather than bleak and beautiful - all the while belying the emotional turbulence in Lauren Mayberry’s lyrics.

There wasn’t a great deal to choose stylistically between Every Open Eye and its predecessor, The Bones of What You Believe, and everything about the process behind Love Is Dead suggests a clean break and a change in direction. They’ve swapped Glasgow for New York and Los Angeles, and after self-producing their last two records, they drafted in Greg Kurstin to helm eight of the twelve tracks here. Kurstin has five Grammys on his mantelpiece and a star-studded CV, at the top of which sits Adele’s "Hello". He surely doesn’t come cheap. In terms of expense, going from producing your own albums to bringing in somebody of his calibre is a little like putting off taking your driving test for ages, then passing it and immediately buying a Ferrari.

Which is fine, of course; Chvrches have fought hard to be in this position, with this kind of resource at their disposal, and given how deep-seated their pop sensibilities are, it’s not really an eyebrow-raising choice. This was already a band with hooks to burn, melodies in abundance, and with enough pop polish that you could see your face reflected in some of their bigger-hitting singles. You can only assume that they thought Kurstin would help them take all of that and make a fully-fledged crossover into the mainstream, having been pressing their noses up against the glass ceiling of the indie world for the past five years.

On the basis of Love Is Dead, though, you quickly begin to wonder whether they would have been better advised to try to smash it on their own, given how well-equipped they already were. Talking to Sound on Sound in 2015 about the decision to make Every Open Eye at their basement studio in Glasgow, Martin Doherty said: “We had the choice of recording anywhere really for the second album...we’d rather just invest the money that we had available into upgrading the gear and patching it all in, rather than giving it to some other studio and another producer in LA or wherever."

He had it right the first time. None of Kurstin’s work on this record has changed the Chvrches sound for the better, but he hasn’t been helped by the fact that most of the songs on Love Is Dead sound as if they’ve been written with some pre-conceived idea of what a big identikit pop band is supposed to sound like in 2018. That’s clear in the myriad panoramic nods to the eighties on the likes of "Get Out", "Forever" and "Never Say Die"; pursuing that sound leaves them shorn of a lot of the contemporary edge that made their last two albums so compelling, and you get the sense that they’ve pursued it less of out a genuine love of that era of pop music (the way The 1975 did a couple of years ago) but because they feel like it’s the done thing at the minute.

Similarly, "Miracle" sounds born out of a fact-finding mission to figure out what goes down well in soulless arenas these days, and serves as a stinging reminder of just how much Imagine Dragons have to answer for. That track and "Graves" both come just after the album’s midpoint, and by that stage it’s becoming impossible to ignore why Love Is Dead feels like such a missed opportunity; the lyrics are littered with the sort of vagaries and clichés that would, to the casual listener, mark Chvrches out as a band without much to say.

This is patently nonsense; over the course of her career so far, Mayberry has consistently demonstrated an unimpeachable level of bravery and integrity in using her platform to speak truth to power. She has consistently highlighted the stomach-turning misogyny that is a daily reality for women in his industry, everywhere from The Guardian to Channel 4 News. Elsewhere, she has torn apart individuals at every level of the sexist food chain from hecklers at shows to Donald Trump - the latter particularly impressive given the group’s standing in America, where mere mention of politics from artists is given short shrift by many fans regardless of which side of the aisle they happen to be on themselves.

It is baffling that so little of this seems to permeate the lyrics she writes, and that instead, we get so many empty vessels that frankly, you could perceive any which way you wanted to - “ask me no questions, I’ll tell you no lies” could mean anything. So could “never getting what I wanted / getting what I needed”. Ironically, you can interpret ‘Graves’ as taking issue with anybody claiming to be apolitical in the current climate: “baby, you can look away / while they’re dancing on our graves / but I will stop at nothing.” It is absolutely her prerogative to write about whatever she likes, but it is peculiar that her lyrics are pretty much the only aspect of her platform as the singer in a popular band that she isn’t using to make bold, vital political statements.

Perhaps being so pointed wouldn’t have suited the drive for mainstream acceptance that Love Is Dead represents. Unsurprisingly, it’s the moments that fall outside of that remit that are the record’s strongest. Doherty’s lead vocal contributions were never amongst the highlights on the first two LPs but the stormy "God’s Plan" is a standout here, as is the similarly moody "My Enemy", on which a low-key guest turn from The National’s Matt Berninger provides a neat foil for Mayberry to shine on the chorus. Closer "Wonderland" finally finds the anthemic sweet spot, easing off the in-your-face arena gas and shooting for something gentler.

All of those tracks feel sparse, built softly with a light touch, which is why the overblown, full-steam-ahead manner of much of the rest of the album is so maddening and - given their past pronouncements on big studios and producers - so utterly perplexing. Perhaps the record will turn Chvrches into genuine chart-botherers, or festival headliners, but their last two albums had already provided compelling evidence that they would have been capable of that under their own steam, without the anaesthetising effect of Kurstin’s expensive production. Love isn’t dead - Chvrches have just been looking for it in all the wrong places.