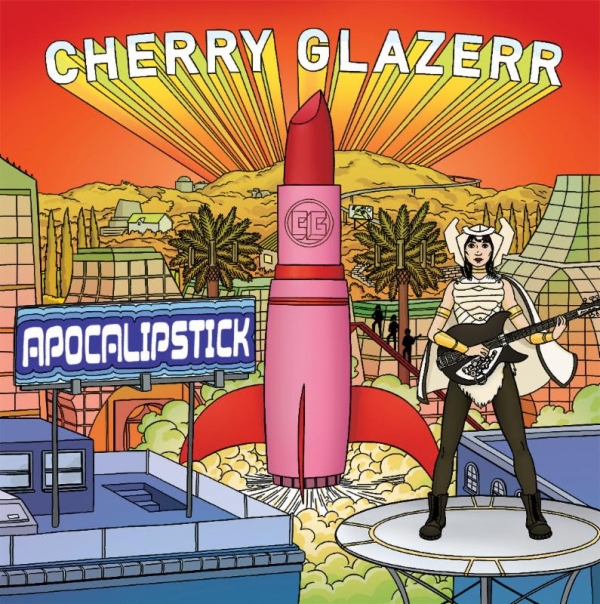 In the few short years since Cherry Glazerr released their debut album, Haxel Princess, on the esteemed Burger Records during 2014, they’ve quite literally become an entirely different band - figurehead Clementine Creevy is the only remaining member from the original line-up that recorded their first album. For Apocalipstick, their debut for Secretly Canadian, Creevy is now joined by multi-instrumentalist Sasami Ashworth and drummer Tabor Allen.

It’s clear, however, that the changes – forced or not – have payed off majorly. Apocalipstick is clear development in sound from the lighthearted scrappiness of their last effort – it’s perfectly polished and, although it’s not their first studio album, it, in many ways, feels like their first proper album. While Haxel Princess was still an enjoyable listen, it lacks the bite and the confidence that can be heard in Creevy’s voice across Apocalipstick.

Luckily, though, Apocalipstick hasn’t lost any of the charm that made their debut so enjoyable in the first place. There may not be any more odes to grilled cheese or branding of Rob Kardashian as a "tool", but, despite the more professional nature of their sound, Cherry Glazerr still aren’t taking themselves too seriously; amongst the album’s highlights is the millennial self-deprecation of “Trash People”, where Creevy admits that her room smells like an ashtray and she wears her underpants three days in a row.

Other highlights include opener and female solidarity anthem “Told You I’d Be With the Guys”, “Nuclear Bomb” – the slowest, yet most effective track on the album – and the self-aware cry for validation of “Instagratifcation”, alongside strong re-recorded versions of fan favourites “Sip O’ Poison” and “Nurse Ratched”. Apocalipstick is fast, furious and, most importantly, fun, making it the first truly badass album of 2017. If you haven’t already, now’s the perfect time to become a slave to the glaze.