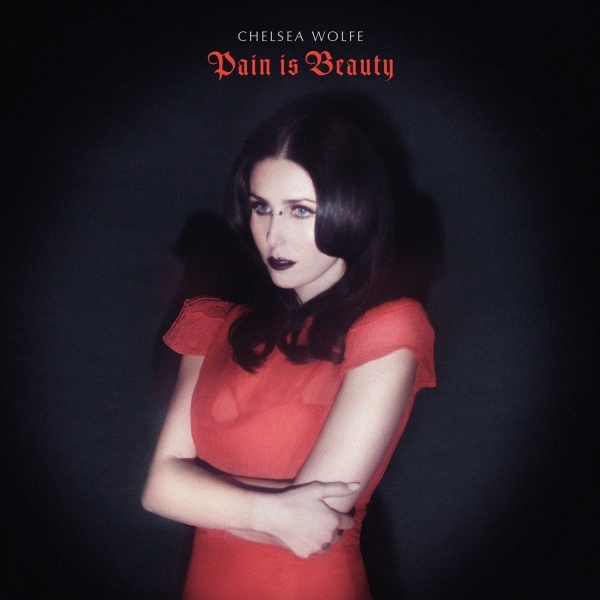 Sacramento native Chelsea Wolfe has a unique sound. Inside her goth-flavoured concoction are drops of industrial rock, a dash of melodrama, a couple jiggers of synthpop and a half-pound of meaty folk. She admits to being influenced by black metal, doom and drone music, as well as Scandinavian folk, which probably explains her array of styles. It’s a potent brew she possesses, comprising simmering darkness and glamorous overtones in a similar vein to Wisconsin opera fiend Zola Jesus. Wolfe’s mesmerising noises are often tough to stick under one particular label, but her goth-folk tendencies tend to shine through prominently; she weaves a brittle, sinister aural tapestry, but it’s also intimate and emotive; there’s a distinct lack of vacuousness, which is nice.

Following on from 2012′s Unknown Rooms: A Collection of Acoustic Songs (album two-and-a-half, if you will), Pain Is Beauty is Wolfe’s third studio effort. She has said that it’s a “love letter to nature” and “an exploration of ancestry, how the mythology, landscapes and traditions of our ancestors affect our personalities today.” Originally a self-conscious performer who hid behind a veil in early shows, and one who departed music for years, unwilling to share her tracks with others, Wolfe is venturing out of her shell on this record. It’s more synthetic, more neo-goth and post-industrial, and while folky threads are visible still, they’re considerably dialled down; guitars lie on the backburner on many tracks.

‘Sick’ is a gigantic, sprawling spacetronica paean. Equal parts frontier-bending excitement and shadowy sturm und drang, it oozes emotion of catastrophic proportions; this is the kind of music you’d hear as the world burned. Shimmering, shivering strings shriek beneath soaring synth sections. The music is fluid, and though armageddon-y, oddly tranquil – it’s a juxtaposition with panache. ‘Lone’ is similar in tone – reserved and calm like the eye of a hurricane. Pastoral chords ring through a swathe of reverb, and Wolfe’s hymnal croon pierces a delicate cloak of acoustic guitar. She shudders and gasps amongst the rivulets of noise, encapsulating desolation within minute textures and barren instrumentation.

More rambunctious cuts include opener ‘Feral Love’. With sparse ’70s horror flick synths – think John Carpenter – and a dash of The/Das broody synthpop, Wolfe tears into her third effort with gusto. Brutal beats akin to Crystal Castles’ ‘Fainting Spells’ pepper the melodics like a tommy gun against a car door. ‘Feral Love’ is indeed a feral ode, with sonic tendrils whipping and lashing as if a new-wave Cthulu. ‘Kings’ is a descent into the kingdom of politics, there’s post-punk on ‘We Hit A Wall’, ‘The Warden’ spews goth-house sensibilities and a Venetian guitar riff. While there’s a decent dose of honest writing and narratives centred around tumultuous love, there’s plenty of in-your-face hooks for it to be infectious. It’s got a gloss that lures you back even when you may be spurned by morose lyrics.

There’s a similarity with Chelsea Wolfe and other contemporary outfits with a gothic bent – Nadine Shah, M O N E Y, Zola Jesus and Anna Von Hausswolff are to be heard throughout. Although the acts may bear resemblance to one another, they all also manage to be distinct; Wolfe does this through her black metal and folk facets. While not explicitly either of those genres, she borrows from both: black metal lends an omnipresent evil, and folk bequeaths a brittle, beating heart. She succeeds in slotting neatly next to a cadre of rising contemporaries, but twisting away to carve her own niche.

Wolfe has crafted an impeccable release here, building upon her existing methods and evolving as a songwriter. Things feel more confident – there’s more energy and oomph (perhaps as a result of the shift in instrumental focus). It’s not exactly swaggering, but you can hear her experiment more; she’s not afraid to stray from the straight’n’narrow. Within those expanded boundaries, we get a breadth of fresh noises. It’s still overtly maudlin, and Wolfe is definitely not afraid to jam a knife between your ribs and wiggle it a little, but it possesses a certain charm that will keep you coming back for more.