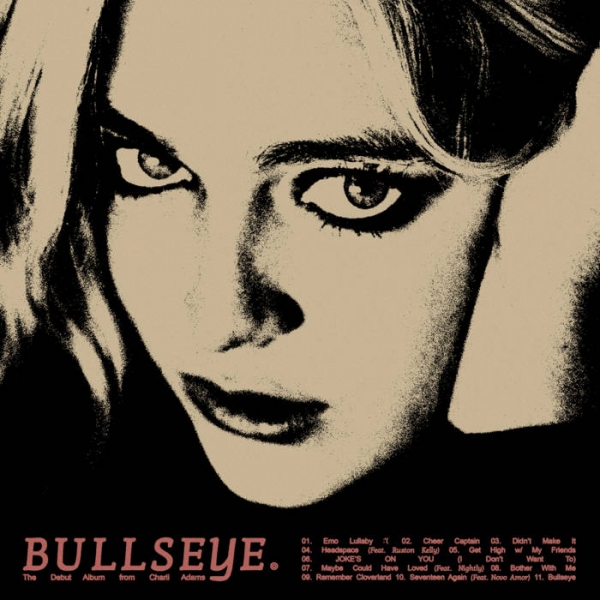 Titled after the nickname Bon Iver’s Justin Vernon gave to her following a coincidental meeting at a dive bar, Bullseye is Charli Adams’ nostalgic therapy session. The album dives into Adams’ past trauma, mistakes, and coping mechanisms, all while delivering a solid package of indie music.

Like most adolescents, Charli Adams had a lot of emotion to deal with in her teens. Journaling all the ups and downs in the hardest yet most healing part of her life, Bullseye is endlessly relatable to the teenager in all of us. It goes through self-hatred, insecurities, getting high and falling in love, and while that may be a broad set of topics to cover, the eleven tracks gently drift from each subject to the next, connected by the consistent writing style that Adams has grown.

The slow-dance sad-song stylings on the album are the classic guitar-led numbers that we’ve come to expect from Adams. Songs like “Headspace”, “Bother With Me”, and “Seventeen Again” each use the twang in her accent and country-road guitar filters to really drive home the yearning notions of her words, and show the inspiration of her new-found home in Nashville. “Cheer Captain” then takes it slightly more upbeat as she reflects on when she denounced her childhood as a cheer captain and moved away from her deeply Christian and conservative family in Alabama. However, the real sad song is the opening “Emo Lullaby :’(“, which beautifully embodies the helplessness and acceptance of past trauma.

The albums peak is the noticeably happier and upbeat halfway point, featuring “Get High w/ My Friends” which employs more electronic production and a melodic hook that will be stuck in your head all week. Its message of ‘f*ck it, let’s just get high’ is joyful, carefree, and the perfect breather through the album. Following straight on from it is “JOKE’S ON YOU (I Don’t Want To)” – a middle finger to men that shows a confidence and self-assurance from Adams which has become almost alien to us as we’re so used to the raw vulnerability she shows in her work. Another track to do this is “Remember Cloverland”, which fondly looks back on the good times as children through some wonderful songwriting and euphoric guitar production.

Adams’ songwriting does have its slip ups though, as the lead single “Didn’t Make It” is a fun little earworm but it has a melody that mostly sticks within the same five notes and becomes frustratingly monotonous at times. A little variation in melody peaks and troughs would have done the song some good and avoided the repetitiveness that could cause someone to hit the skip button.

Bullseye is such a strong debut album from the still relatively underground Charli Adams. It has the maturity and musicality of someone beyond her years and is a promising indication of what’s to come down the line.