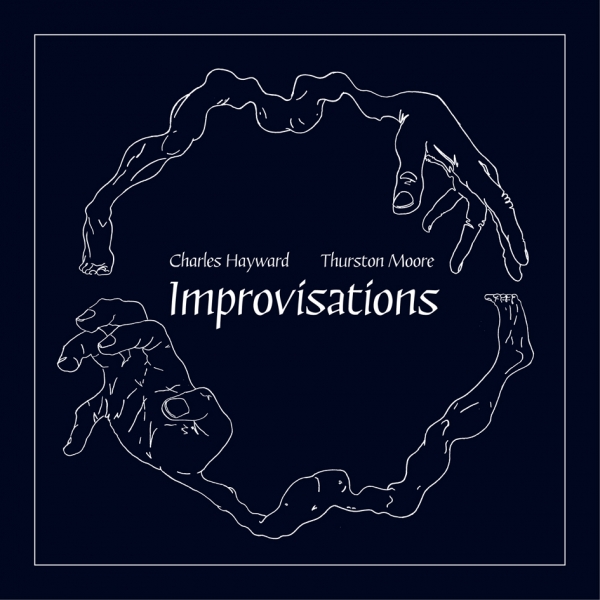 The combined CVs of the two participants are what really sell this limited edition release, but as records of jam sessions go, Improvisations is a solid day’s work.

It makes perfect sense that Charles Hayward, formerly of This Heat and currently of This is Not This Heat, and Thurston Moore, formerly of Sonic Youth and currently of a solo career, would end up collaborating in this way. The only question that their teaming up raises is what took them so long to fit it into their schedules. Improvisations was documented on merely the third occasion that Hayward and Moore had gotten in a room to play together, yet it emits a sense of familiarity between the musicians. Here they do not sound at all as if they are still feeling out one another’s particular approach.

The seven tracks on the album -- “A1” through “A3” on the first side and “B1” through “B4” on the other -- are not structured songs, but Hayward’s kinetic drumming and Moore’s topographic guitar sprawl recurringly align and separate, speed up and slow down together, in what start to feel like nearly identifiable patterns. Such shapes may be just figures in the clouds, but they catch the imagination as they drift by. The point of entry, “A1”, roils and spills for eight minutes before suddenly locking into an aggressive groove, one that sounds like it would gladly keep going if the clock wasn’t already running, and the rest of the afternoon carried on in much the same way.

The ephemeral successes of Improvisations bring to mind another one-off joint with a similar premise yet, of course, different results: J. Spaceman and Kid Millions’ Live at Le Poisson Rouge album from a few years ago. Such pairings are proving to be worthwhile beyond just their pedigree.