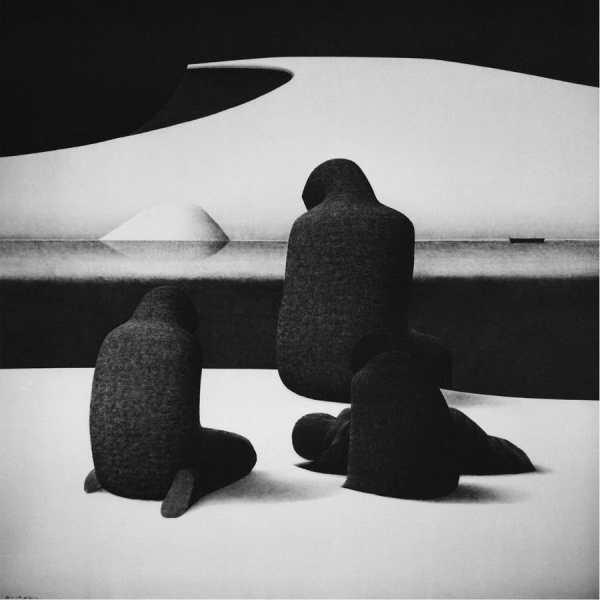 Toward the end of 2013, Mike Silver, aka CFCF, said in an interview that he almost felt his newest album, Outside, was “a bit too epic, like I went a bit too far.” Radiance and Submission, which was recorded that winter, often reads like a conscious reaction to that feeling.

At eight songs in length, the record floats by in not much more than half an hour. Beyond mere running time, Silver leaves significantly more open space in his compositions this time around. At any given moment a track like “Sculptures of Sand” or “Tethered in Dark” might hang on little more than a fluttering synth or a tranquil drone. Even in busier moments, there is sufficient enough breathing room to catch each sound and instrument’s subtle exhalations.

The gliding synthesizer clouds, dense electronic patterns, and rippling percussion made Outside feel stoically glacial in places, vaporously locomotive in others. As those ever-shifting elements intertwined, came unstuck, and reconfigured throughout the record’s ten tracks, where one song ended and another began often seemed of secondary importance, if not somewhat irrelevant. In that regard, it was more akin to Exercises, the first of the two EPs that preceded Outside, rather than the second, Music for Objects, in which each of the eight tracks intentionally staked out a distinct identity. Radiance and Submission falls somewhere between the two in that regard. Each song sets out to achieve something apart from the others, but the motion between them is often fluid.

The influences Silver cites with each CFCF release are worth taking note of in order to better understand the musical dialogs he engages in. Those conversations often involve literature, film and other forms of art, not just music. CFCF’s The River EP from 2010 was a response to Werner Herzog’s Fitzcarraldo. Exercises combined Silver’s cinematic inclinations with his interest in Brutalist architecture. Music for Objects is still perhaps his most representational work to date; each song an ode to the form and function of everyday items like keys, rings, and turnstiles.

Other guideposts marked the path of Outside, most notably a certain strain of ‘80s adult contemporary rock that came to the fore on “This Breath” and “The Crossing”. Silver’s appropriations of Greed Decade comfort food have so far seemed a little less winking than Bon Iver’s “Beth/Rest” (even if Justin Vernon claims a legit fondness for the genre), though it’s fun to imagine Silver and Vernon sitting around listening to Christopher Cross records together. Overall, the impression that CFCF creates is that Silver’s approach is for the most part earnest, and his chosen influences on a given record should be reasonably taken at face value.

That stands even when he pulls a few choice cuts out of your father’s CD collection, or from behind the counter at a spa. Silver was listening to jazz and improvisational guitarists such Pat Metheny, Terry Callier, and the Norwegian composer Terje Rypdal while recording Radiance and Submission, and was inspired to make the record in the first place in part by the recent purchase of an acoustic guitar. “A Various Language (From the Same Hill)” showcases Silver’s new acquisition, its strings plucked with nimble spontaneity, towering crystalline in the mix above warm hums and softly conversing marimbas. “Tethered in Dark” follows, building gradually on a foundation of voice-like pipes and pouring water effects. CFCF has toyed around with an undercurrent of New Age music in previous releases, but here it comes to the fore, subliminally nudging the listener into getting that massage they’ve been thinking about.

Key references on Radiance and Submission are made to Japanese literature and, again, Werner Herzog. The opening “In Praise of Shadows” is named after an essay on Japanese aesthetics by author and novelist Jun'ichirō Tanizaki, while “The Ruined Map” gets its title from Kobo Abe’s novel from 1967, which was also made into a film the following year by Hiroshi Teshigahara. One of only two tracks on the record to feature vocals, the effected quivering of Silver’s voice is disarming. The other, “La Soufrière”, is named for Herzog’s 1977 documentary in which he visits an island that has been evacuated in anticipation of a volcano erupting and interviews a few men who stayed behind in spite of, or because of, the impending disaster.

Themes of loneliness and the state of being apart seem to have been very present in Silver’s mind when making Radiance and Submission, perhaps at least in part due to the Canadian winter that was setting in as he was recording it. Isolation isn’t necessarily a bad thing; it can also be freeing, as embodied by the childlike Tarzan bellow in “Two Mirrors” that abruptly ends the album. It’s easy to imagine Silver coming out from underneath the heaviness of Outside, and wanting to find ease in songs like the lovely, circular “Blanketed in Snow a Place Returned”. A year and a half later, the feeling of liberation is still tangible.