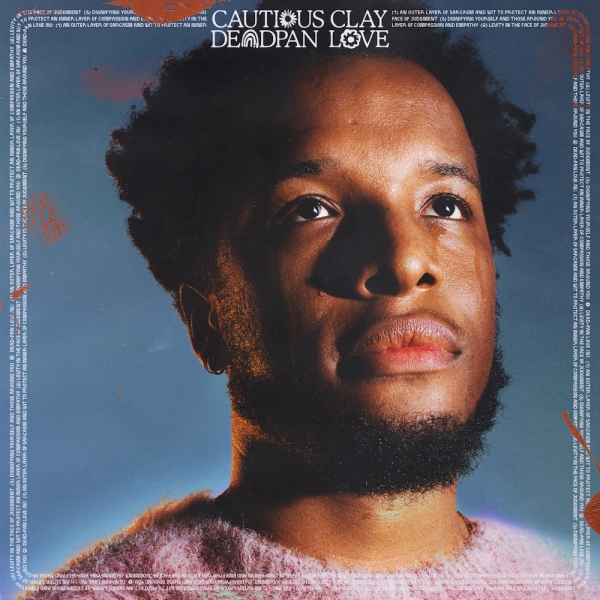 “Deadpan Love explores the ways I cope with the worst of what humanity has to offer. It’s about opposites—having an outer layer that’s tougher, this ‘deadpan’ state, and an inner layer of compassion, where you’re open to being there for the people you care about. It’s this warring compassion and cynicism that has empowered me to express myself through this medium.” – Cautious Clay

Taking on a pretty broad subject, Ohio-born, New York-based multi-instrumentalist Joshua Karpeh - aka Cautious Clay - returns with Deadpan Love, and he's diving into the human condition of emotion and the tough exterior we all use to get through the hardest times in life. It’s a tough topic to breach, and Karpeh approaches it with style, dignity, and grace. Taking influence from classic R&B through gospel and jazz, the album forms as a performance piece, with the introductory “High Risk Travel”, a half-way interlude, and concluding the album with “Bump Stock” - a determined song denouncing responsibility to feel what the world demands of us, “I don’t wanna love / I don’t wanna hate / I don’t wanna feel anymore”.

Split into two, the album’s halves are noticeably different, with the first being more upbeat, and somewhat more lively than the second. Standout track “Strange Love”, featuring rapper SABA, displays intelligent and thought-out songwriting – boasting jazz-inspired progressions, dreamy backing vocals, and trumpet riffs to match. It’s this kind of song that removes any risk of the album ever sounding too similar, which is especially high when there’s a weighty fourteen tracks. Also taking on a different sound are the likes of “Karma & Friends”, with a much darker and dramatic side to it, and the gospel influence on “Box of Bones” taking things to church as it slowly but surely speeds up its BPM.

The second half of the album suffers less variation, and the gospel influence takes a much stronger hold on tracks like “Artificial Irrelevance” and “Spinner”. This half is much slower and reflective, and it’s a shame that it couldn’t have been taken that one step further to entirely switch up the vibe. However, “Wildfire” is the saving grace. With its humble guitar beginnings, through to the gorgeous falsetto melody, and the choral arrangements in its final chorus, the song explores how subtleties from one person can accidentally cause emotion, or ‘wildfires’, in other people. It’s a perfect pre-unrequited love song, and it gives a fresh perspective on this sort of emotion.

Karpeh's vocals are a true highlight on Deadpan Love, whether it’s the tasteful falsettos on “Roots”; the meticulous jazz melodies on “Strange Love”; or the vocal arrangement of backing vocals throughout the album. Both his tone and skill compliment the instrumental arrangements on each track, often effortlessly switching between his head, the mix and chesty voice are inspiring.

“Why Is Your Clay So Cautious” is an interesting interlude for the album, and it’s an apt inward focused pallet cleanser. Taking this 30 second breather is a sensible inclusion as it allevaited any pressure from the weight of the surrounding material.

Overall, Deadpan Love is a sad reflection on the ups and downs of life. “Whoa” is a beautiful plea to himself, trying not to focus on what he’s feeling and just staying in the moment. This kind of plea is reflected in “Dying in the Subtlety”, which is one for more directness and assertiveness in a relationship. The album’s overarching message is that of helplessness, and the need to be free of the pressure and demands of everyday connections with others. After all, he says it perfectly himself, “Love is just a passion / with a four letter name” – and I suppose, that really is it.