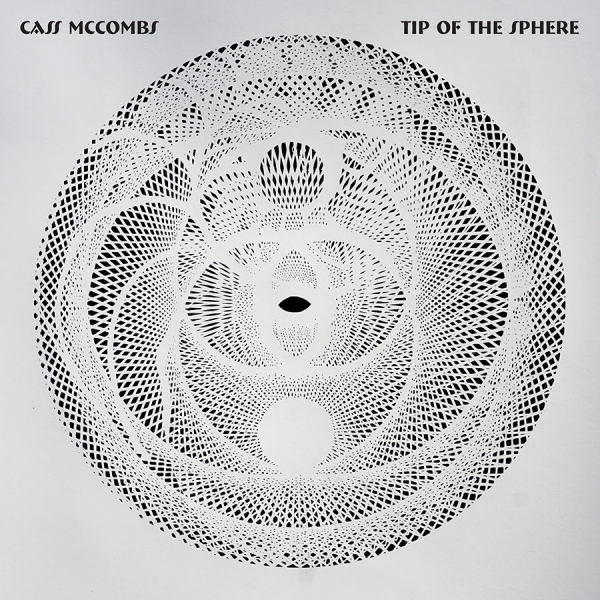 On his Mangy Love follow-up, Tip of the Sphere, the prolific Cass McCombs continues to dream of the wandering vagabond through his distinct, poetic narrative vision.

While 2016 saw McCombs lending his hand to 4AD’s Day of the Dead compilation, to the acclaim of a feature piece in the Sunday Arts & Leisure section of The New York Times and an appearance on The Ellen DeGeneres Show, his newest offering doesn’t veer too far off course from his modus operandi. But while Tip of the Sphere spans constant themes of destination and solace that McCombs is known to explore, he continues to stand as a songwriter of real conviction, gifting some of his most incandescent songs to date.

While it may be easy enough to pigeonhole McCombs, his ability to draw boundaries and loosen those conceptions and subtleties speak to his savviness in the ways he delivers a finished song. Alongside Tip of the Sphere’s eleven tracks, the LP’s ambitious Tahiti Pehrson-commissioned layout is one way in which McCombs gifts a rather unique experience. Included in all three vinyl editions is a modern-day homage to Brion Gysin’s Dream Machine, but renamed for this purpose, the “Castillo de la Esfera”. Similar to the original, the laser-cut paper insert is meant to be rolled then locked into its corresponding tabs to form a cylinder. Once constructed, it’s to be set atop the center of a turntable with a light source displayed inside while Tip of the Sphere plays. McCombs’ press release concludes stating that “…thoughts are encouraged to wander.” It’s quite the befitting accompaniment: a physical, yet simplistic interface that McCombs chooses to include that helps further ignite a sensation, but through a visual aesthetic.

But while McCombs’ efforts to create something fantastical are imbued throughout his writing, he is a musician who is truly himself in what he offers and undoubtedly expressive of who he is – Tip of the Sphere stands as an LP that translates his ardor in a very conceivable way. From the emanating shuffle of “Estrella” to the piano-filled jaunt of “Absentee”, McCombs is able to put forth an energy that oftentimes feels lost in his genre – here, that’s not so much the case because he’s able to hone and project his vision with such direct aim. “Real Life” calls to mind an ode to Elliott Smith is there ever was while first single, “Sleeping Volcanoes” scintillates with electric guitar where its core addresses the fleeting moments we may experience with complete strangers.

“Prayer For Another Day” stands as the LP’s most contemplative – an empyrean meditation with treated wood block knocks and melting guitar. It shows what McCombs is able to achieve under a simpler hand and a track that’s easy to sink into. Howbeit, part of what helps tie Tip of the Sphere’s songs in making their rounds is McCombs’ approach: a definitive plan and a choice to record in one location: Brooklyn’s Shahzad Ismaily’s Figure 8 Studios. While McCombs and his team give a variety of texture and elements from boisterous rollicks to its more soothing and untroubled tracks, Tip of the Sphere is tied together quite nicely. It sounds cohesive and direct, even with the slightly astray “American Canyon Sutra” where McCombs articulates through a spoken-word performance piece.

But within its hefty time frame at almost an hour, Tip of the Sphere roves through landscapes of intimacy, death, and most certainly McCombs’ deadpan humor as a lyricist. From the charismatic figures he deploys within the stories of his songs like we see in the upbeat “The Great Pixely Train Robbery” to the themes of loss and heartbreak on “Tying Up Loose Ends”, it’s become no surprise the fame attached to his name. The almost entirely instrumental jam, “Rounder”, carries out like a drug-induced trip – even in its cliché, it’s a stunning throwback package that melds and intertwines thoughts of psych-pop sojourns allowing us to pleasantly become lost. Nonetheless, in all its glory, Tip of the Sphere tackles generally what we’d expect it to – but with no disappointment, McCombs functions as a fail-safe narrator for our time. Within the LP’s musings, we as listeners look to him as he maintains a sense of worldliness and top-tier deftness as a songwriter and within those wonders and expectations, he invites us along as we get the chance to engage with his particular, introspective vision.