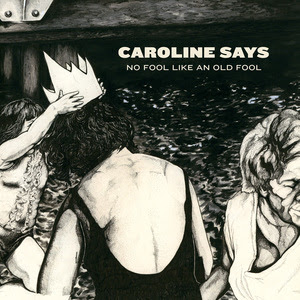 No Fool Like An Old Fool is the sophomore follow-up to Western Vinyl’s formal re-release last summer of Caroline Sallee’s DIY cassette debut, 50,000,000 Elvis Fans Can’t Be Wrong, which Sallee originally put together in 2014.

Sallee’s songs grow out of the spaces between action; when a friend turns to leave and suddenly it’s just you and your own thoughts, as the credits begin to roll and the house lights come on after a movie, a long moment stuck in traffic. The assumption with hushed solo songwriters is often that their lyrical themes are dominated by introspection, but Sallee makes a point to step outside of her own perspective from time to time and try to occupy a different mindset from her own. Here, “I Tried” -- set in a drowsy bossa nova mode that recalls Yo La Tengo’s periodic forays into similar territory -- is about the downshift from fame to obscurity, inspired by encounters Sallee had at an old grocery store job.

Modest means and humble ends shape the character of No Fool Like An Old Fool. The album’s nine songs were recorded in a less-than-ideal basement environ with a landlord couple continually creaking the floorboards above. Such conditions might require a differentiation between ‘bedroom pop’ and ‘apartment pop’; the former being defined more by selectively limited resources, with the latter being contained by having to keep it down due to people trying to sleep above or below you. Or, in Sallee’s case, needing to wait until the neighbors quieted down before recording.

The mood of No Fool Like An Old Fool isn’t muffled or monochrome for it. “Sweet Home Alabama” spins irresistibly on a vintage soul sample as it takes stock of small town life in Sallee’s home state can do to one’s dreams: “I’m driven down, down, down/I’m exactly where you want me/Stuck in this sad old town”. “A Good Thief Steals Clean” skates on low blue ambience and a muted metronomic tick right into the electro-folk of “Rip Off” and “Black Hole”, while “Cool Jerk” revisits the more upbeat surf-y chime of “I Think I’m Alone Now” from her first album. No Fool Like An Old Fool makes a lot of its unpresuming space.