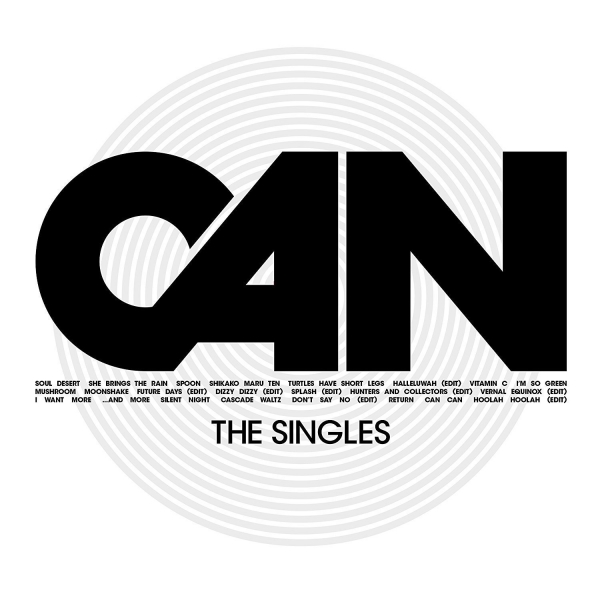 The idea of a singles collection by the krautrock titans Can will look like a pointless exercise to most of their fans, who’ll know their best tracks were lengthy beasts deriving from extended jam sessions.

Formed in Cologne in 1968, Can continued the questioning of rock 'n roll originally started by The Velvet Underground. Holgar Czukay, Jaki Liebezeit, Michael Karoli and Irmin Schmidt along with vocalists Malcolm Mooney and Damo Suzuki Can easily hold their own alongside The Velvets, The Beatles, The Jimi Hendrix Experience and The Beach Boys in terms of reshaping rock music. Racially mixed (Mooney was African American, while Suzuki hailed from Japan), it could also be argued that musically Can are the most influential of those bands, seeing as every group who've been described as 'angular' is directly influenced by the guitar work of Karoli, while any described as 'motorik' is due to the devastating hammer blow playing of the recently departed Liebezeit (his playing arguably surpasses that of the likes of the better known Bonham, Watts, Moon, Baker etc.), while listening back to the track "Hunters and Collectors" shows clear lineage between Can and Bowie’s Berlin trilogy, even more so than the more often feted Kraftwerk or Neu!.

Most Can fans will of course know them as an album band, but what's surprising about Can - The Singles is that they did actually manage to produce music which resembled pop many times, albeit in a pretty esoteric form. The jaunty "Turtles Have Short Legs" with the ear-wormy coda of "We can find it Out", or the funky as hell "I'm So Green" from arguably their finest long playing moment, 1972's Ege Bamyasi, are great pop moments, but twisted and psychedelic, propulsive and rhythmic, performed by masters of their chosen instrument.

There's no way any Can fan would head to the glorious funk stew of "Halleluwah", here in its four-minute edit, over the what the fuck-ness of the original twenty-minute version on the ''71 album Tago Mago, but when you're used to that version, hearing it within the confines of a pop edit does provide a new perspective. Likewise, shaving seven minutes from the title track of their Future Days album from ''75 and six minutes from " Vernal Equinox" transforms hypnotic space jams into challenging, radio-unfriendly songs that certainly got no airplay.

Another achievement of The Singles is how it explicitly highlights their rejection of musical boundaries, be it the funky jazz drumming of Liebezeit, the aforementioned "Halleluwah" (clearly an influence on the groundbreaking hip hop productions of Dilla and Check Your Head-era Beastie Boys) or the barely-there anti-guitar playing of Karoli (see also the work of Blixa Bargeld while in Nick Cave's Bad Seeds) creating the hollow style of what would become post punk, they delved into prog, electronica, African rhythms, psych, and - with the only hit on this compilation, 1976s "I Want More' - took a disco beat to create new wave before even punk was a thing.

There are flaws here which naturally come with a back catalogue which stuttered in terms of quality towards the end of their existence. After Suzuki's departure in 1973 and a gradual move from the band to production duties for Czukay, the music gradually became more conventional, the inclusion of dreadful covers of "Silent Night" and "Can-Can" are comedy krautrock by numbers but not actually funny, while "Hoolah Hoolah" - a single from their reformation in 1989 after a ten year break - only shows how any future compilations could benefit from a back catalogue editing similar to The Clash’s post Combat Rock material.

Sure, these are minor gripes and to truly get to grips with Can you need to head to the six albums from ‘69’s Monster Movie to Soon Over Babaluma in 1974, but as an entry level to this magnificent band, this more than suffices.