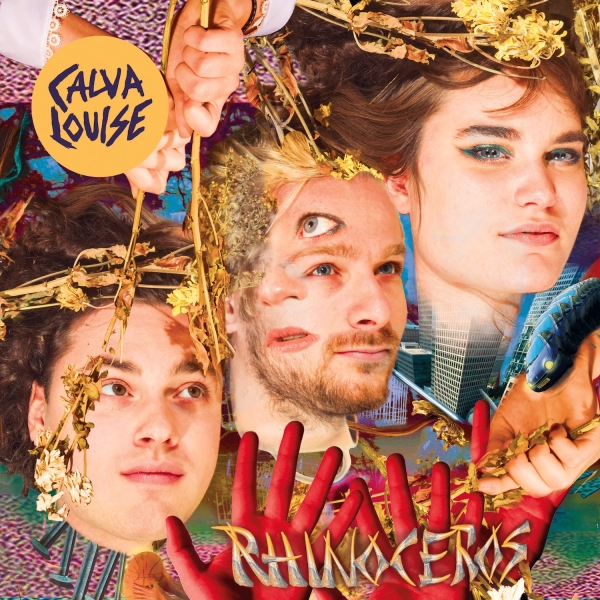 If you’re looking to differentiate yourself as having something new to say in music, investing in a three-piece indie-punk band singing about feeling disenfranchised isn’t necessarily the wisest move.

Via singles such as “I Heard A Cry” and “I’m Gonna Do Well”, Calva Louise however suggested they may indeed have something else to offer.

Part of the appeal lies in the international makeup of the band. One part English, one part Māori and one part Venezuelan, the DNA of the trio lends a little extra gravity to their tales of isolation. There’s no censoring of intent on track “Outrageous” (“Living in this limbo, all that you can do is laugh”), whereas the charming “No Hay” acts as a timely reminder midway through Rhinoceros of the band’s origins, vocalist and guitarist Jess Allanic singing it almost totally in Spanish.

In reality, however, Calva Louise rarely present this as a genuine point of difference, and the true beauty of their debut is the way in which it deals with grappling with one’s place in the world as a local issue. One of Rhinoceros’ highlights, “Getting Closer”, wonderfully adopts the kind of indie-psychedelic combination King Gizzard and the Lizard Wizard and fellow Londoners Francobollo have been wrestling with, as Allanic frankly discusses the windy path of dealing with mental health and life circumstances.

“I’m Gonna Do Well” meanwhile is an indie-punk tune to give even the most dedicated pessimists a healthy dose of oomph. Allanic is unrelenting in her overriding optimism, her howl towards the end testament to the ferocious determination of Rhinoceros as a whole.

At times reminiscent of the intricate indie on Doe’s excellent 2018 record Grow Into It, Allanic and co. working through their own peaks and troughs is what makes Rhinoceros so special. On this basis, their main point of differentiation is that they do it so well.