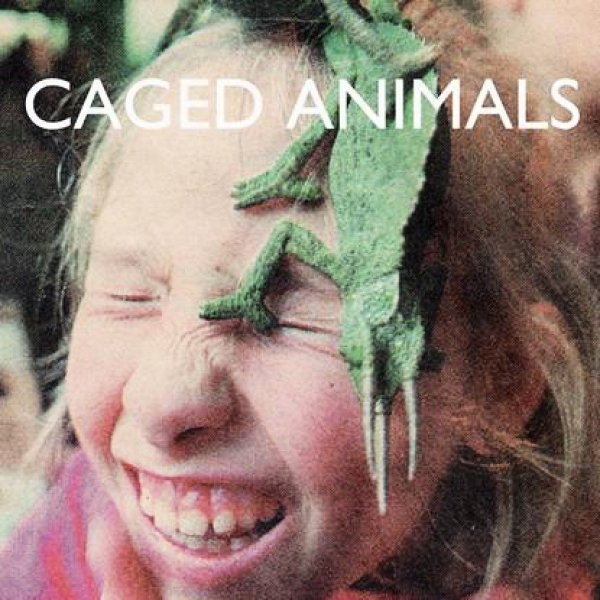 Following on from 2011 debut Eat Their Own, Caged Animals return with the cathartic In The Land Of Giants. The heart of Vincent Cacchione’s newest project continues to pump blood through the veins of poetic narratives and escapism seen on the memorable debut. Only now, explorations of family and friends, faith and fear are all penned with a heightened intensity of feeling and underlying optimism, resulting in a purposeful sense of release and recovery.

Bruised yet bright opener ‘Too Much Dark’ marries heavy metaphors with graceful melodies, dark lyrics with a lighter ambience. Flinching keyboards are dispelled by the gradual swelling of a fuzzed-out electro chorus, followed by multiple levels of introspection: an overturning realisation (“I thought that I was pure / The heart gives up when it’s mature”); a helpless declaration (“But I wanna run to you / I wanna hold you beside me”); a concluding vulnerable plea (“I wanna see through you / I want you to see through me”). It is perhaps this closing line in particular that best captures the record as a spiritual creation that exposes the defining experiences that Cacchione wants you to see.

‘Stop Hurting Each Other’ is a palliative combination of dreamy, tender beats and queasy, wavering synths that rise and fall with their own desirous intent of cultivating mindful sentiments. Mystical psych-pop melodies morph in and around each other as they lead into the following track, debut single ‘Cindy + Me’. A grittier-than-expected song about outlaws in love, it builds upon percussive rhythms, vocal echoes and sonic drum interludes in a hasty but passionate way.

A short-lived return to the familiar poetic romanticism sees ‘The Sound of Thunder’ incorporate stronger guitar riffs and quirky streams of consciousness with a rumbling din of computerised electronics and layered vocals. ‘U + Yr Rocketship’ might leave a few letters out the title, but it leaves little room for disapproval as you are thrown into an ethereal orbit of fluctuating astronomical synths and cosmic surprises.

Halfway marker ‘Tiny Sounds’ delivers what it promises – slight, delicate layers of sonic experimentation create a tender, crooning atmosphere of gurgling vocals and tentative outbursts of keyboard refrains. But ‘A Psychic Lasso’ delivers what you don’t expect – a narrative about a co-dependent relationship between two men, to be precise, inspired by Cacchione’s realization that “so many gay songwriters tailored their couplets toward the heterosexual”.

Title track ‘In The Land Of Giants’ sets a sluggish, stoned-like mood, a mood perfect for exploring illusory worlds of the imagination. In fact, it’s almost a shame this song comes so late into the record, since it captures the rhythmic fantasy of daydreams and the subtle intangibility of memory – that itself often appears dreamlike – with a harmonious perfection that is otherwise seen scattered throughout the other eleven tracks. ‘(you’re a giant now)’, as the brackets suggest, acts as an extension of this fantastical world of imagined scenarios and experiences. ‘What You’re Looking For’ concludes the journey of spiritual reverie with a finger-clicking, drum droning melody that sluggishly whirrs beneath a sultry, life-affirming promise: “it takes a long time / maybe your whole life / but you’ll find what you’re looking for”.

Emotionally resonant, the record depends heavily on the distillation of what Cacchione took from his experiences to guide his process of song-writing, and the direct translation into your own imagination. Although personal, “In The Land Of Giants” intimately considers the human condition, drawing parallels between experiences that seem as otherworldly as they do earthly, between feelings that go beyond human description but are nevertheless rooted in the human understanding of emotion – considerations that can be understood by us all.