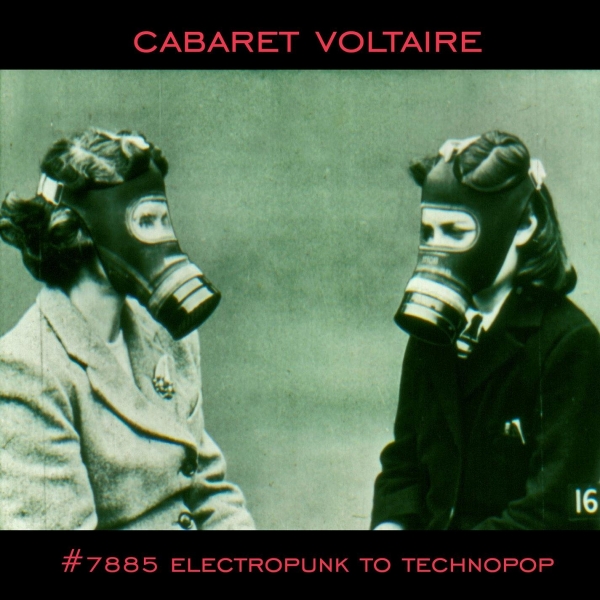 When you think of Cabaret Voltaire, there’s a good chance that the music you think of will fall within the bounds of the material covered in this new compilation. Whether you’re into their ‘electro punk’ beginnings or their ‘techno pop’ second phase (or both), you’ll have a good idea about what to expect from this collection of singles, edits, cut-downs and concise album tracks. With such a brief (short tracks, essentially), one might imagine that the necessary quota of early material might take up the majority of the record. This is not the case. ​

Of course, no Cabs compilation would be without the dusty dystopian electronic barrage of “Do The Mussolini (Headkick)” and “The Set Up”, which make up the second side of their seminal ‘78 EP, the ironically titled Extended Play. The two tracks from the ‘A’ side are the fractured, heartbeat-rhythm of “Talkover” and their squalling, nauseating take on the Velvet Underground’s crown jewel, “Here She Comes Now”. “Mussolini” and “The Set Up” deserve their place on every Cabs compilation, such is their uber-relevancy and hypnotic sound. These two recordings show Messrs Kirk, Mallinder and Watson at the onset of their creative, iconoclastic peak – a peak again explored by the inclusion of the title tracks of the “Nag Nag Nag” and “Silent Command” singles. The former is an absolutely mindblowing slice of electro-mania driven by a thick bottom end rolling and thundering, buried in a dense fug of wailing feedback; the latter is a sharper, more colourful effort that is just as bewildering… it features some wacky treated vocals wrapped up inside a warped, tantric electronic dub soundscape.

Of the other early period tracks on here, Mix-Up’s “ On Every Other Street” and The Voice of America’s “Kneel To The Boss” are the most surprising inclusions – “On Every Other Street” is one of my favourite under-appreciated tracks from the debut album, and the stoned-Suicide feel of “Kneel To The Boss” sounds better here than on the album proper, sequenced as it is alongside more sparkling material. “Seconds Too Late”, the incredible 1980 single, is here too – it still sounds as horrifying as it did the first time I heard it: The grating rhythm and distorted vocals are testament to the Cabs’ successful attempts to both unsettle and engage their listeners, often within the bounds of the same song. From their best album, Red Mecca, one track is included – the infectious biomechanical grind of “Landslide” is a perfect track for this collection: it’s short, potent and totally infectious, and will instantly attract new ears towards its parent album (which is the point of releases like this, no?) “Split Second Feeling” or “Black Mask” (a personal favourite) could also have slotted nicely into the tracklisting, but 2x45’s “Breathe Deep” takes the next slot on the album.

“Breathe Deep”, and the collection it originated from, marked the first bold steps from the Cabs to cast off their futuristic, malignant, synthetic punk sound and replace it with a relentlessly Modern electronica that was as germane then as it is harrowing today. The (relatively) polished, multi-layered feel of the 2x45 collection only hinted at the cleaned up, aggressively sterile sound that emerged on the Crackdown record. The Crackdown marked the beginning of the second phase of Cabaret Voltaire’s existence – with Chris Watson’s departure, the duo of Mallinder and Kirk re-established the sound that the Cabs would use for the next three records. The music made as a duo takes up the rest of the run-time of #7885, and some of the strongest material to bear the Cabaret Voltaire name falls within these bounds.

The Carry On campiness of “I Want You” and the full-throttle assault of “Kino” are the ubiquitous selections, but they’re largely offset by the surprise inclusion of “Warm” from the Covenant LP. While not the most immediate of the tracks on that particular album, the opposing vocal samples (an exaggerated coital sighing and a deadpan “I work hard!” mantra are the primary focal points) are more fun than confrontational. The squelchy musical atmosphere is given an urgency by the whip-crack, spasmodic rhythm. Much of the rest of the material (“James Brown”, “Sensoria”, “Crackdown”) practically chose itself – it’s like a highlight reel for the mid-period work of Cabaret Voltaire.

The record as a whole plays like a mix-tape – it seems to be a run-through of necessary tracks interspersed with a couple of exciting detours, offering nothing to long-term Cabs fans but an interesting collection of tunes they probably wouldn’t have chosen themselves. The absence of brief-fulfilling tracks like the aforementioned “Black Mask”, the electrifying smoothness of “Spies In The Wires” and the near-blissful emptiness of “Theme From Earthshaker” is a mild grievance, but that’s down to personal taste. This is a great entry point into the catalogue of one of Britain’s most inventive, iconic bands – but the shallowness of the record makes it largely unnecessary for anyone that owns the Original Sound compilations, or indeed the albums themselves. ​