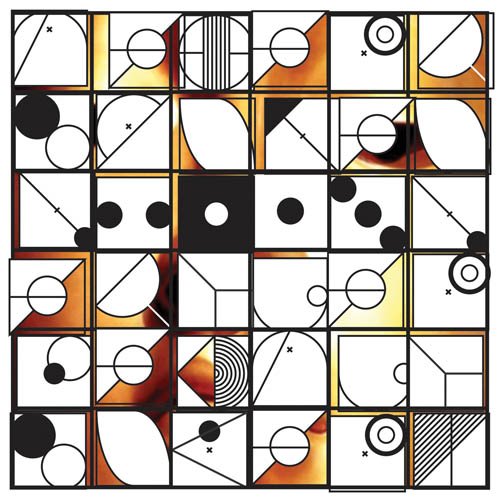 The term “DIY” in music can conjure some fairly negative images in the mind of the modern music fan. A cynic will instantly imagine poor musicianship, recordings that sound like they were made in a metal bin and po-faced artistes trying to exchange you their shitty tape for a bite of sandwich.

Sometimes though, it’s not about living up to some impossible set of DIY aesthetic rules – we can’t all be Ian MacKaye (more’s the pity), and it’s not about pretending that a field recording of your drunk mate leaving you a voicemail is, in some way, art. Sometimes DIY is actually about doing it yourself in the truest sense of the word. Sometimes DIY is practical and beautiful.

Brooklyn duo Buke and Gase have approached their second full length armed with instruments they have created with their own fair hands – the buke (a six-string, baritone ukelele) and the gase (it’s a cross between a guitar and a bass, right?). The musical endeavours of Arone Dyer (lead vocalist) and Aron Sanchez (a former collaborator of the Blue Man Group) are handily named after these two inventions and even more handily they happen to use these and many other unique sounds to create the kind of wonderful, odd, occasionally transcendent music you (yes YOU) are yearning to hear.

There’s as much sex in these songs as someone like, say, the Yeah Yeah Yeahs would offer you but so much more invention. ‘Hard Times’ for instance, a detuned, stumbling, broken choral that lurches into life just as the magic dust is sprinkled over its twitching form, simultaneously stuns with its strangeness while also slinking “Lucky for me I’ve got vitamin E/Let’s stop these scars from overtaking my entire body”.

This heady combination is emphasised by the occasional bit of jaw-dropping melody. Opener ‘Houdini Crush’ climbs out from under an Interpol bassline (gaseline?) and slaps a vaulting tune upside yer head in the most big-booted, stomping way imaginable. The random alternation between subtle math-pop, deranged experimentia and get-the-fuck-out handclap anthem is bewildering and beautiful.

Now this balancing act doesn’t really allow for much indulgence in order to be effective. You go too far one way or the other on a tightrope and you’ll fall – as the pair do on a few tracks that shout “shambles” rather than scream “symbiosis”.

There’s the hectoring, tiresome ‘Split Like A Lip, No Blood On The Beard’, a faltering charge that ultimately falls in on itself and a couple of ever-so-brief bits of filler like ‘You Do Yours First’ that seem jammed in for the sake of quirk rather than in the spirit of near-mad adventure the rest of the record embroils itself in.

There are absolutely brilliant songs here and, better, they are drawn from a different musical palette than that to which you are used – the organic Purity Ring-sounds of ‘Hiccup’ bring proud, battered pop music wrought out on pans you stole from your mother’s cupboard – childlike, filled with wonder, a grey landscape forced into loveliness.

Their reference points too, while familiar, avoid becoming too much so by virtue of their askew approach. The Kate Bushisms of ‘Twisting The Lasso Of Truth’ are wrapped in tiptoe-paced dreaminess built with blunt, brash tools; the Boredoms-hinting, Mike Watt-nudging ‘General Dome’ maintains individuality with its suddenly soaring latter part – a neat little collision of chords that occurs a few times across the record and, just like when Wilco do it best, is a heartlifting surprise.

Let’s not overlook the storming ‘Cyclopean’ or the buzzing ‘My Best Andre Shot’ – gorgeous lunges into tune-led weirdness they both are; and let’s certainly not ignore the Police-referencing (to these ears at least) ‘Contortion In Training’ with its madly loveable false ending and tremendously direct nostalgia: “Remember the boys? The ice cream and noise?”.

In fact, a couple of less than diverting songs aside, this is an album that won’t be forgotten in a hurry whichever way you look at it. It’s one thing to be inventive, to be intelligent and to take a unique approach – but with that so often comes coldness, detachment, a lack of connection with an audience. Listening to the outstanding back-bedroom R’n’B of closer ‘Metozoa’, being tempted into a little hip swing on the walk to work and at the same time wondering “how did they make THAT sound?” shows that Buke and Gase will never be in danger of that particular crime. Unlike many of their contemporaries they also value the power of a heartfelt song, of something that satisfies and fulfills.

DIY? It seems they’ve already done it for you.