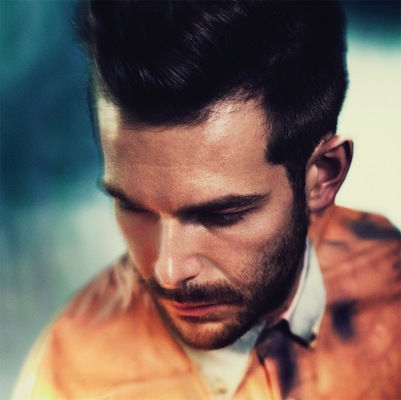 You know those particularly bad break-ups that leave you swigging whisky at 5am and howling along to PopArt by the Pet Shop Boys? Well we reckon Rod Thomas has had a few of them. His debut as Bright Light Bright Light is rife with tales of head-spinning crushes, desire-induced dating disasters and love gone horribly wrong.

But no matter how many times it gets messy, Thomas appears to dust himself off and head back into battle, and it’s this unshakeable optimism at the core of Make Me Believe In Hope that makes it such a heartwarming listen. Musically it’s incredibly clever too; Thomas enlisting the talents of songwriter/producer Jon Shave (Rita Ora, Girls Aloud), Boom Bip (producer and one half of Neon Neon) and Andy Chatterley (Kylie writer and producer and occasional keys man for Kanye) to conjure up slick sounding, intricate tracks that cherry pick bits from ‘90s chart hits, disco and crisp electronica. As such it feels fuzzily familiar and yet fresh at the same time.

The real strength of Thomas’ sound, however, lies in the disarming honesty he injects into his songwriting. And whether it comes from personal experience or observation, he makes everything he sings sound confessional. “Now everything I wanted seems so immature” he sighs over the twinkling electronics and scuttling beats of album opener ‘Immature’, while on ‘Feel It’ he’s longing for “the fire in the stomach, the screaming of the heart” and for someone to give him “something to dream about” as the track builds to an intoxicating climax complete with euphoric house diva warbling.

There’s only “one dance left” on crushing acoustic guitar-backed ditty ‘Debris’, ‘Cry At Films’ sees him repeatedly asking “where did I go wrong?” over big bouncy beats and shimmering synths, and while his other half has a “disco moment”, Thomas stands “at the side of the room” reflecting on “the cracks” that are creeping into their relationship. If we weren’t so uplifted by the breezy melodies and crisp production we’d be feeling pretty downcast by now. “Moving on is the hardest thing to do… when you’ve opened up to someone, how do you heal?” he questions on ‘Moves’. Oh Rod, we just don’t know.

We find our answer in comparatively sparse and brooding closer ‘Grace’. “It takes time”, Thomas sings, “keep hope when you don’t see it… start to open up again”; his fighting spirit ultimately triumphing over despair. And somewhere out West, Neil Tennant tips his cone hat and smiles, because smart, piece-your-heart-back-together pop has found a new curator in Bright Light Bright Light, and it’s in very safe hands.