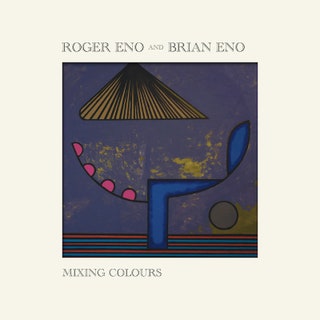 Quite possibly the most underrated and undervalued icon of the rock era, Brian Eno has done more to push the boundaries of music than just about anyone in the past century.

His first major contribution was to help birth the first two Roxy Music albums – making them a world-class, peerlessly influential band in the process. Then, he went on to begin an incredible, wrongly overlooked solo rock career, where albums like Here Come the Warm Jets, Taking Tiger Mountain (By Strategy), Another Green World and Before and After Science did enough to secure him a place in the hearts and minds of anybody who ever heard them.

Not content with breaking down preconceived ideas of what rock ‘n’ roll was capable of, he went on to collaborate with, discover, champion and nurture a who’s-who of legendary rock acts (David Bowie, U2, Talking Heads) and cult favourites (Grace Jones, Harmonia, Devo, Mars, D.N.A., Lydia Lunch). Oh, and he worked with Coldplay too – he's got bills to pay, damn it!

However, despite all of this, Eno is probably most well-known for pioneering and redefining the term ‘ambient music’. First hinting at it on his flawless Another Green World, Eno truly defined the genre on his 1975 album Discreet Music, before going on to perfect it on Ambient 1: Music for Airports. His intention, when setting out the ‘rules’ for ambient music, were that it should be both a guide and a fellow explorer. You should be able to zone in and zone out of the music at will, and it should be there for you regardless.

In truth, Mixing Colours is the product of a family that has such a rich and complex history with the ambient genre that it would be a disservice to attempt to contextualize the album any further here. Put simply, Brian Eno, along with his brother Roger, first collaborated when they attempted to make music befitting man’s most outrageous achievement: landing on the Moon.

Since that album (Apollo: Atmospheres and Soundtracks) was released in 1980, they’ve collaborated many times, but this is the first album they have released as a duo, and the first new music from the pair since the bonus tracks on the reissue of Apollo last year.

Presented here are 18 wonderful, rich and varied ambient tracks, offering different tints and textures and delicate whiffs of perfumed sound. All but one of the tracks is named after a colour (or shade), and many of them contain evocative reminders of the contributions that the Eno brothers have made to this genre over the years.

The final track, “Slow Movement: Sand” is just perfection, and a complete summation of the brothers’ collaboration up until this point. The digitally manipulated solo piano contains within it the entire history of ambient music, from Robert Wyatt’s splintered “Frère Jacques” on Ambient 1, to Max Richter’s plush dreamscapes on Sleep. It is luscious and golden and controlled and vibrant, and a perfect end to a fantastic album.

The preceding tracks feature many recurring components used in a variety of ways, drawing out a kaleidoscope of timbral characteristics. “Cerulean Blue” and “Verdigris” appear to have been built from the same materials, while the tracks that centralise and focus on Roger Eno’s solo piano - “Snow”, “Blonde”, “Dark Sienna” and “Iris” - draw out many of the same emotional beats as “Slow Movement: Sand”, with each of them drawing influence from the works of Franz Schubert.

The other tracks are equally impressive. The soft, lovely opener “Spring Frost” offers a pleasing contrast to the ceremonial, haunting “Obsidian”, which in turn is complemented by the cleansing, spiritual “Burnt Umber”. Put simply, every track offers harmonious and enthralling moods that complement and combine and amalgamate - something only the very best ambient albums manage.

While this won’t be considered the jewel in either Eno’s crown, Mixing Colours should definitely be acknowledged as another feather in their respective caps. It showcases, again, one of the most successful and influential sibling partnerships in any genre. This year marks the fortieth anniversary of their first album, and one can only hope that it’s anything but their last.