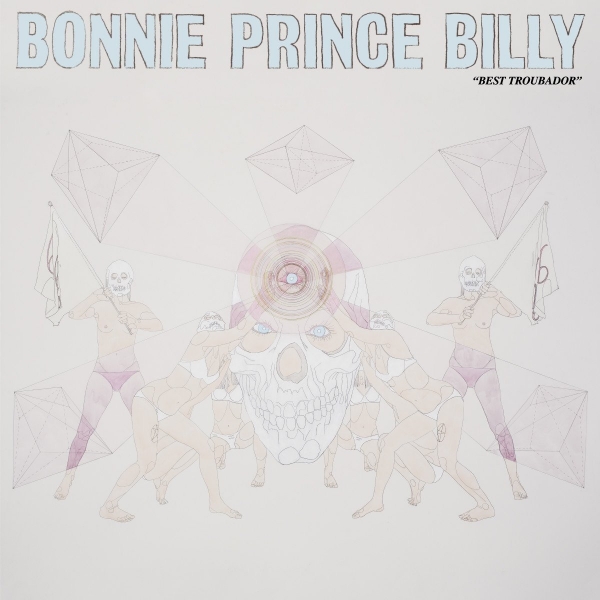 Will Oldham’s near 25-year career has been marked by some remarkable collaborations; the Superwolf record back in 2005 with Matt Sweeney of Chavez, his covers collaboration with Tortoise a year later The Brave and the Bold (more on which later), and his occasional work with Emmett Kelly’s Cairo Gang in recent years being just a few.

This album however is something of a conversation with a more looming, iconic figure - the recently deceased country legend Merle Haggard. While ostensibly a straight-up 16 track covers record this plays out more like a collaborative effort with Oldham playing both roles, sometimes handing off to female vocalists like Mary Feiock to add splashes of much-needed colour.

A fair barometer to use for Best Troubadour is the aforementioned The Brave and the Bold, which tackled classics like Bruce Springsteen’s "Thunder Road" and Richard Thompson’s "The Calvary Cross" to some effect, but without much in the way of theme or consistency – it was essentially a bunch of songs Oldham and the Tortoise team enjoyed and threw together pretty damn well. Again, this album is a different beast entirely - while there are a couple of Haggard’s best known tunes here ("I Always Get Lucky With You", popularised by the great George Jones, gets wonderful service for instance), Oldham has delved deep into his vast catalogue and shaped a dark, yet stoic and often celebratory album that offers a kind of patchwork narrative grounded in Haggard’s eerily poetic lyricism and Oldham’s lifelong obsession with his work.

An early highlight comes in the shape of "The Days the Rains Came" from Haggard’s acclaimed 1969 album Pride in What I Am; Oldham takes the simple instrumentation of the original and adds flute, a military drum and a gorgeous backing vocal courtesy of members of the Bonafide United Musicians, delivering Oldham-like lines such as “You took my heart and handed me a crown” and clipped poem couplets like “Your strange love is what I found on the day the rains came down / I remember, we found shelter in the cave.”

The aforementioned Cash & Carter-isms of "I Always Get Lucky With You" see Oldham remake the Freddy Powers-penned tuned with lush horns and FM production, maintaining the cheeky sensuality and contrasting faith and spirituality of the original while sadly losing a little of its bite, so sweet does the thing sound.

Later comes the whispered wonder of "My Old Pal", a devotional both dedicated and evocative in which Oldham croons “It would make me weary heart so light sweetheart, your face again to see” and in a moment that may cause instant weeping issues “Still you’ll always be a pal of mine though it may be only in dreams.”

All over the record there’s a notion that Haggard/Oldham is a beat-up, beaten man; from "Always on a Mountain When I Fall’ where losing has become “a way of life”, through the self-referencing "Haggard (Like I’ve Never Been Before)", where “This loneliness that we go through ain’t worth it any more”, to the sax soaked "Nobody’s Darling", Oldham intoning “Goodbye little darling, I’m leaving this cold world behind…”. It’s a record that reflects loss but handles it with grace, Oldham’s voice calling Haggard back from the past and intoning his work with an honest dignity befitting of Haggard’s legend.

Twin highlights here are the comparable "Some of us Fly" from Chicago Wind and closer "If Only I Could Fly". On the former Oldham offers “When life deals you a hand you don’t throw it away / the cards that you draw are the cards that you play”, a musing on the inevitability of ultimate failure. It’s downbeat stuff certainly but lines like “Some play it smart - I had a ball” show a bittersweet side to the misery that makes it that much more touching.

You’ll possibly be hearing almost all of these songs for the first time and sometimes it hits you soft like spring rain, fresh new and beautiful.

On the latter we’re in Palace territory - a home-recorded tune that harks back to Oldham’s earliest work - distant drums, a scratching banjo with the lines “I can hardly stand, got nowhere to run” and talks of “Sad songs for us to bear”…You wonder if the record as a whole may have benefited from this kind of lo-fi treatment, yet it's the contrast that helps draw your full attention to this set closer.

While a covers album can be a pedestrian thing, often about what the artist can do to make their mark on a song or set of songs, Bonnie Prince Billy’s homage to Haggard is so much more than that - it’s reaching out to a ghost, pulling the uninitiated to a plane where it’s possible for Haggard to be renewed and revitalised while all the time being revered and respected.