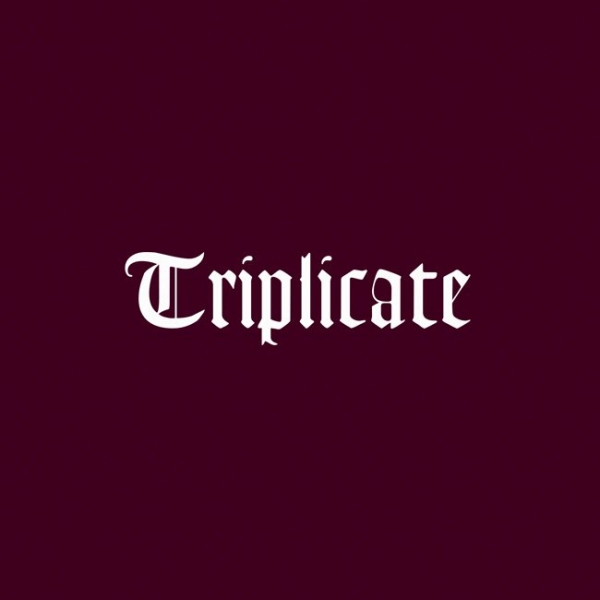 Bob Dylan enthusiasts will no doubt have been ecstatic when news of the legendary songwriter’s first ever triple album of new studio recordings broke.

The excitement may have been slightly dampened by the announcement that Triplicate consists entirely of Dylan’s takes of standards from the Great American Songbook (mainly material associated with Frank Sinatra), by now firmly established as a last chance saloon for light entertainers and would-be Rat Packers seeking an easy route to a handsome pay day.

Dylan wrapping his famously battered pipes around 30 (ten per loosely themed record, although heartbreak, loneliness, lost love, time slipping away and blue, blue feeling dominate regardless of which disc you pick) slices of Tin Pan Alley's most gilded produce from the long gone bygone days, including such endlessly recycled evergreens as "Stardust", "As Time Goes By" and "Stormy Weather" that have been in circulation for the best part of a century, may sound like the oddest project this bona fide American icon has slapped his name on since 2009's croaky festive platter Christmas in the Heart or, on the non-musical front, the recent Nobel Prize for Literature will he/won't he acceptance saga.

But the concept of Triplicate isn't really that far-fetched. Dylan's albums of original material from 2001's Love & Theft to 2012's Tempest have been fuelled by the Minnesota-born legend's encyclopaedic knowledge of, and reverence for classic American music forms, including the sort of sophisticated urban balladry of a certain vintage that the rise of rock 'n' roll largely relegated to musty nostalgia these three discs are filled with. At 75, Dylan's been around long enough to have encountered this material fresh, before it was elevated into the hallowed status of standards, with skilfully crafted songs tendered gradually more and more stale by slick crooners grinning their way smugly through supposedly sad tunes, endless downpours of gloopy strings and enough cheap sentimentality to sustain a 1,000 second tier sub-Disney flicks. This is precisely the sort of assembly line songcraft - think of a composer and a lyricist toiling away at the piano in a smoke-filled office, trying to come up with a hit to order as the clock's ticking, as opposed to the muse-driven, soul-baring sensitive types we associate with the classic archetype of a singer-songwriter - that Dylan helped retire by proving it's perfectly possible for a singer to come up with something that resonates far more with their audience if they write their own material, as opposed to trusting the content-provision to the established professionals. However, it's clear from the thoroughly committed performances that this melodically rich, carefully crafted stuff resonates just as deeply with the man authorities know as Robert Zimmerman as, say, the traditional folk and blues fare Dylan revisited on 1992's Good As I Been to You and 1993's World Gone Wrong, the latter of which remains one of the most underrated, stark gems in his mammoth hit-and-miss catalogue.

The problem is that the concept is by now disappointingly familiar. When Dylan revealed his first sort-of Sinatra tribute with 2014's Shadows in the Night, the idea, not to mention Dylan's newly rediscovered command of his seemingly beyond-repair vocal chords and the twilit, minimalist arrangements, with Donnie Herron's weeping, ghostly pedal steel stepping in for the overbearing orchestras that usually hover over this sort of undertakings like an impenetrable sugar-coated fog, helped render the supposedly overfamiliar material completely fresh, ripe with hidden depths and deep wells of thoroughly affecting heartbreak long buried under saccharine arrangements and emptily over-emoting vocalists. The impact was lessened on the more-of-same-but-less-so follow-up Fallen Angels (2015). It's weakened yet more on Triplicate, especially as there's so much of it to plough through and the approach is unaltered from the album’s two predecessors to the point where all three releases could have easily been recorded at the same session.

No matter how strong the performances and what the pedigree of the material on display: by disc three, both the unhurriedly floating wee small hours laments of lost love and the bluesy mid-tempo tunes - occasionally guest starring a small brass section as the only addition to Dylan's long-term touring band - start to sound indistinguishable from one another. From a modern perspective, the detachedly cool likes of "I Guess I'll Have to Change My Plans" pack the seeds of their own doom as a dominant musical style. Next to such tunes that deal with betrayal and impending loneliness with all the passion and despair of someone who's not been able to get a table at their favoured restaurant, written in a tone that suggests their authors went straight from childhood to weary middle-aged disillusionment, the sweaty physicality of rock 'n' roll and the idea that songs could get nakedly personal and cover topics beyond romantic turmoil, put so convincingly forward by Dylan himself in his 60's pomp, must have seemed incredibly exciting.

That said, Dylan can still thrill as a crooner when the material is right. The beautifully bare-bones "I Could Have Told You" and especially the sublimely regret-laden lament for the impermanence of everything "Once Upon a Time" - with the band cooking up a gently glowing, sepia-tinged cheek-to-cheek sway that's halfway between a long-gone suave big city nightspot and a country barn dance with sawdust on the floor - are genuinely moving, up there with such highlights of Shadows in the Night as "Autumn Leaves", another oft-sampled song made uncommonly real and tangible by the grit and wear evident in Dylan's weather-beaten but beautifully phrased, note-perfect sigh of a croon, equal amounts gravel and honey.

It's this compelling whiff of hard travelling and wisdom won the hard way that Dylan's approach oozes with that allows him to slap his own unique stamp on material already sampled by such iconic vocalists as Sinatra, Nat King Cole, Ella Fitzgerald and Billie Holiday. Anyone who still argues that Dylan can't sing should be forced to listen to the Triplicate version of "My One and Only Love", a startlingly lovely, delicately manoeuvred take on a challenging melody that holds its own against classic renditions by the likes of Johnny Hartman with John Coltrane, until they see the error of their ways.

It's probably telling that the highlights are mainly found on Triplicate's first disc. The sheer volume of material on offer soon succumbs to the law of diminishing returns. Here's hoping such extended exposure to what's often considered the gold standard of American songwriting will help rejuvenate Dylan's own creative juices, leading to more original material. Failing that, it'd be great to see Dylan apply his impressive skills as a producer and arranger - intimate and warm, Triplicate sounds truly amazing, as if you're sat right there in the studio when the band's cutting the tunes, with Dylan crooning gently in your ear - to a similarly stripped-down yet luxuriously textured set of the kind of arcane folk, blues and country covers that have been cropping up on his setlists for several years now.